Despite significant downturns in the U.S. auto manufacturing and housing sectors, the national economy should see a period of modest growth in 2007, thanks in part to low energy prices, according to the chief economist for Bank of America's investment management division.

Lynn Reaser, who spoke to an audience of local business people, faculty and students at Point Loma Nazarene University, said she expects a volatile year for financial markets, but ultimately one that could produce total returns of 10 percent for investors.

Reaser said she expects to see the hot areas of investment shift from small-cap to large-cap companies and an increase of investing in international markets and stocks with higher dividends.

"Overall, 2007 I think will be another year of expansion for the U.S. economy," Reaser said. "We still think that the likelihood of a recession is fairly low and that this year will not (see) explosive growth but (rather) a fairly solid year for most companies." 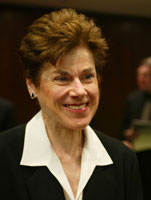 The housing correction continues to weigh on the U.S. economy as well as the San Diego region. Reaser is optimistic about the trend. She said she suspects home sales will bottom out in the next several months and expects the slump in housing construction to follow. However, she said she believes home prices will remain soft for at least the remainder of 2007.

Another major factor in how well the U.S. economy performs this year is oil prices, Reaser noted. She said she was encouraged by the way the economy "weathered" the environment of high energy prices during 2006.

"As oil prices hit close to $80 a barrel, this economy seemed to be able to survive the storm," she said.

Oil prices, which have fallen about 30 percent to the low $50 range, are generally a boon to the U.S. economy and investors because they yield lower gas prices, bolstering consumer confidence while driving down inflationary pressures and costs to corporations. This creates a favorable environment for the Federal Reserve, which has expressed repeatedly its chief concern is taming inflation into the 1 percent to 2 percent range.

In 2006 the demand for oil in industrialized countries declined for the first time in 20 years. Coupled with increased oil production by OPEC and non-OPEC countries, Reaser said she expects oil to stay within the mid-$50 area for the year.

"The huge plunge in oil prices is giving us a huge bonanza," she observed. Short-term interest rates, which have been on hold since August after the Federal Reserve halted a string of 17-consecutive 0.25 percent increases, will remain relatively flat for the remainder of 2007, Reaser said.

The Federal Reserve will hold its first monetary policy meeting of the year next week. Reaser said she expects the Fed will have little cause to consider either a cut or an increase in the federal funds rate given the waning of inflationary pressures of late.

However, Reasers sees the Fed raising interest rates slightly by the end of the year. Compared with the rest of the country, Reaser said San Diego's local economy has held up well because of strong trade, transportation and technology sectors.

Reaser sees in San Diego a "much better showing than you will find in most areas of the country at this point," she said.