Mary Cunningham hasn't served in the military, but she knows how to take on the role of commander.

After more than five years serving as president and CEO of San Diego-based USA Federal Credit Union, Cunningham's leadership has resulted in the member-owned financial cooperative doubling in size to more than 61,000 members worldwide and more than $700 million in assets.

"I landed in a job that suited me very well," Cunningham said, citing her background in communications and 25 years within the credit union industry prior to joining USA Federal.

"(Credit unions) immediately appealed to me because I enjoyed doing something that I thought was a noble thing," helping people achieve their financial dreams, she said. "Our focus is on service rather than maximizing profits for shareholders." 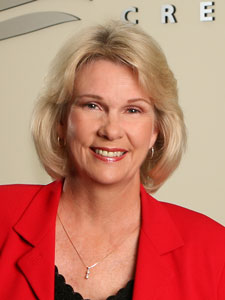 Despite her industry experience, USA Federal represented a different challenge to Cunningham. The financial institution was founded in 1953 as the Naval Training Center Employees Federal Credit Union, and a bulk of the cooperative's members are active or retired military. Cunningham thinks this is the company's niche within the industry.

Just 20 percent of the credit union's members reside in San Diego County, according to Cunningham. As a result, USA Federal has branches in California, Nevada, Japan and Korea, which requires the credit union to step up the pace in terms of its electronic product offering and ability to service members remotely.

While it may be unusual for a woman to hold the top position in a company with strong military affiliations, Cunningham has adapted quickly to the role in part because of her business approach, according to Michael Willoughby, chairman of the board of directors for the credit union.

"We were a nonentity in the industry (before Cunningham), now we're known by name," Willoughby said. Cunningham has moved the credit union into new markets, hired the right employees and introduced new savings products to motivate people with limited resources to save, he added.

"One of the biggest challenges facing consumers in the U.S. is our propensity to borrow and get everything now," rather than learning how to save and be financially independent, Cunningham said.

Currently a large problem for the credit union is predatory payday lenders who prey upon young military families. These families can get "over their heads" if they get caught up in debt cycles.

"That's where a credit union will step in and help you to consolidate your bills," she said. "It's a huge friend to have in your pocket."

"You will always find lower interest rates on loans, higher interest rates on savings, better fee pricing and always superior service (through any credit union as opposed to a bank)," she said. "It's a superior business model for the everyday consumer to handle their financial affairs."

Maintaining her foothold in the credit union community appears imminent; Cunningham enjoys the constantly changing business. Reminiscing over her past 31 years in the industry, she recalls a time when she worked in a basic shop that offered nothing but past book savings accounts and auto and signatory loans.

"It was streamlined and simple," she said. Today, she explained, the credit union must maintain a full level of business lending, e-statements, online banking, blogs and all mortgage and investment services.

"It's those challenges that really keep me interested in the business," she said.

The plan is to continue heading credit unions until she retires.

"Some of us get lucky in life in that we land in a position that not only brings home the bacon, but one we are truly passionate about."