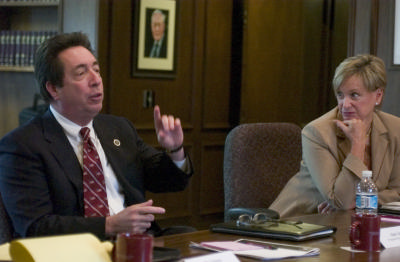 Taking a contrarian perspective, benefiting from downturns in the housing market, possible pressure on pharmaceutical and biotechnology companies from the new Democrat-controlled Congress, and investing in health care are a few ways local investment professionals said they plan on leveraging their clients' portfolios in the coming year.

"The contrarian perspective in valuation is the only thing that we can always rely on," said Asset Planning Solutions' Stern.

Stern said the health care industry is currently producing some great opportunities for investors. "I'm overweight in health care right now," he said. "I think it's the buy of a century."

Others voiced concerns over the new Democrat majority in the legislative branch in Washington, D.C.

"With Democrats in the Legislature ... we may see a difficulty for pharmaceuticals," said Stirling of RBC Dain.

Wright, of Investment Quality Trends, said that scenario could present a great opportunity for investors.

"I hope there's a stink," said Wright, commenting on the possibility of the Legislature causing problems for the pharmaceutical sector. "Please God, let them do it, because I get to buy more shares with a high dividend yield."

"If you look at individual biotechs, I don't think I've ever seen more absolute blowups, not only in San Diego but throughout the state," observed Leedom, noting a number of companies, including Neurocrine Biosciences Inc. (Nasdaq: NBIX), were down as much as 80 percent on the year.

Evergreen Wealth Management's Aiello said the biotechnology sector has been hampered by what he sees as an increase in risk and decrease in the availability of deep-pocketed investors willing to pump capital into companies.

"I can remember 20 years ago when anybody with a compound and a Ph.D. could raise $100 million," he said. "But I think from a historical perspective there have been very, very few successful compounds that have gone from venture stage to a marketed pharmaceutical. I think the big venture investors are looking and saying the probabilities just aren't there."

The big question of the day was whether the housing downturn had reached something approaching its bottom.

"If you look at residential expenditure and investment over real estate cycles going back to the mid-1940s, the average peak to trough decline in that expenditure has been about 25 percent," he said. "So far in this cycle it's been about 8 percent. It would be pretty unusual if we could put the brakes on here."

Most participants looked to the housing situation for indicators on how the Federal Reserve Bank will handle short-term interests rates over the course of the year. All but two believed that rates would finish the year at the current level, 5.25 percent, or lower. Those two agreed that rates would rise by May or June.

"The consumer has used the appreciation of their homes as their savings account, which they've been drawing off of," said Stirling. "My opinion on rates being flat to slightly down this year is due to the housing market and the impact on the consumer."

Wilsey said he believes if the Fed tries to lower rates the outcome will be "disastrous."

"We have an inverted yield curve, which means we're very close, I think, to a slowdown," he said.

Stern said he tries to avoid such speculation.

"The only truth if we're talking about making money or great investing: You stick to your model, regardless of what it is," he said. "I think if housing is going to stay slow, great -- where's the opportunity?"