By LISA KOVACH, Special to the Daily Transcript
Thursday, February 22, 2007

The cost of housing in San Diego makes homeownership an unattainable goal for many residents, but a new condominium project in National City may offer an opportunity for people who thought they were priced out of the San Diego market.

According to a 2006 report on housing affordability in the region by the San Diego Association of Governments, the median price of all new and resale single-family homes and condominiums is $520,000. New detached single-family homes average out in the $800,000 range, a 350 percent increase since 1996.

For National City residents, whose median income tops out at $41,180, purchasing a home can be especially challenging.

"Many of the buyers at Harbor View are current National City residents," said Rafael Mendez, sales agent at Harbor View. "Most of them have been long-term renters who weren't able to afford to buy in National City, and now they can." 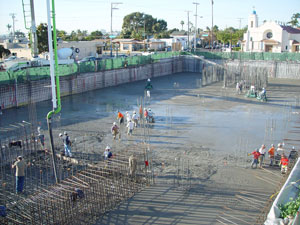 The 15 units in phase one at Harbor View, which were released in October, are nearly sold out.

"The interest in Harbor View Condominiums is growing every day," Mendez said. "We have already sold 14 of the 15 units that were released, and we anticipate the second phase of units, which we are scheduled to release in March, to also sell quickly."

Located at 404 E. Eighth St., just minutes from downtown, Harbor View Condominiums is also attracting attention from people who work in downtown but don't want to pay the high downtown housing prices and are intrigued by the renaissance under way in National City.

Harbor View Condominiums is the first residential project to break ground under the city's new Downtown Specific Plan, which was approved in February 2005, and calls for more than $2 billion dollars in development.

Harbor View is only one part of the plan to re-energize National City. Home to more than 63,000 residents, the city recently completed new state-of-the-art public facilities including a city hall, fire station headquarters, police station and library.

With National City's ongoing renaissance, the area is experiencing huge growth in jobs, housing and business activity, providing an economic stimulus for the entire region.

In the last three years, National City has invested more than $20 million in infrastructure improvements.

"The Downtown Specific Plan really is an important start to the vision of National City," said Brad Raulston, executive director of National City's Community Development Corp. "It shows the city's commitment to continue to bring life to National City."

Located on Eighth Street, one of the two main downtown thoroughfares identified in the Downtown Specific Plan, Harbor View helps contribute to the city's vision of creating a walkable community as envisioned under the plan, Whitelaw said.

"Harbor View is located within walking distance to many community amenities and services, such as the National City Library, Martin Luther King Community Center, Kimball Park, Big Ben's Market and Niederfrank's Ice Cream," she said. "It is a prime example of the city's urban redevelopment."

"With the ground-floor retail and attractive landscaping, Harbor View will help create a pleasant and interesting pedestrian experience," Whitelaw said.

Construction at Harbor View, which is slated for completion in fall 2007, is moving along quickly. The concrete pour already is completed for the underground garage, the foundation and the first two floors.

Kovach is a senior account manager with Whitelaw Marketing Inc.