By CANDICE REED, Special to the Daily Transcript
Friday, April 27, 2007

Although new home sales continue to be on a downward slide, Scott McMillin is still optimistic about the future of the Corky McMillin Cos.

"From our prospective, the market has been crazy for the past few years and it never made any sense to us," said McMillin. "We tried to be cautious and I think that it's helping us now that things have changed. It's still an exciting time for us, particularly with what we're doing out at the Eastern Urban Center."

McMillin Land Development is still in the planning stages for the Eastern Urban Center on master-planned Otay Ranch in Chula Vista on a 214-acre property, which will be divided into 10 districts. The site is located along the soon-to-be-completed state Route 125 freeway between Birch Road and Hunte Parkway. The mixed-use plan for 3,000 housing units and 3.4 million square feet of commercial in office, civic, retail and hotel elements are keeping the family-run business extremely busy during the housing market slowdown. 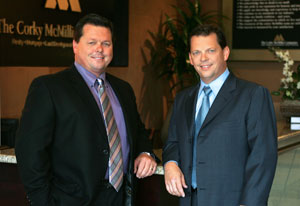 Mark McMillin (left) and Scott McMillin,Co-Chairmen and Co-CEOs of the Corky McMillin Cos.

"My dad's business philosophy was always: You have to be in business to have a business," McMillin said. "As builders we're continuing to work on more diverse projects as well as keeping our people excited about the housing market, and we're not the type of people who sit around and wait for everything to get better. We keep moving ahead."

Adds brother Mark McMillin, "That's such a great project in South County, we're really trying to think outside of the box on this one and not just go with the cookie-cutter type of projects that a lot of people tend to think of these days when they build a community."

The Corky McMillin Cos. includes five core businesses: McMillin Land Development, McMillin Homes, McMillin Realty, McMillin Mortgage and McMillin Commercial. Brothers Mark and Scott McMillin serve as Co-Chairman and Co-CEO of the companies. Corky McMillin Cos. employs about 800 people and 500 real estate agents in 11 offices throughout the county and one office in Bakersfield. It sells homes in Imperial County, Riverside County, the Central Valley and San Antonio.

Mark graduated from SDSU with a degree in marketing. From there he worked his way through almost every job the company offered. He even interned with framing contractors and civil engineers to get a broader understanding of the business. When he entered college, he wanted to enroll in a construction program, but SDSU didn't have one. In fact, such a program didn't exist in the whole state of California. Now Mark -- who said a solid education in construction engineering and business management is critical to achieve a thriving building industry -- is the driving force behind SDSU's College of Engineering's Construction Engineering and Management (CEM) program.

"Mark and I work very well together," said Scott McMillin. "Mark is more on the construction side and I lean towards the finance. It works, I think, because neither one of us really wants to do the other's job."

Macey L. "Corky" McMillin moved from Missouri to Chula Vista when he was 14 and started a small construction company in Bonita in 1960, with his wife, Vonnie. Mark and Scott followed in their footsteps, and in the past 47 years, the McMillin Cos. has built more than 20,000 homes, 16 mixed-use master-planned communities, more than 20 community parks, 673 student apartments and dormitories on three campuses, and 2,000 military residences.

Corky McMillin, an avid off-road racer, died in September 2005 at the age of 76, but the company continues to move forward with projects such as the one in Chula Vista and the controversial $500 million base-reuse project, Liberty Station.

Nearly seven years ago, the city turned over 235 acres of the former Naval Training Center in Point Loma to McMillin to develop. The former boot camp closed 10 years ago and the city spent more than four years planning the redevelopment. McMillin was chosen over Lennar Builders (NYSE: LEN) as the master developer and given the task of building $125 in infrastructure improvements on the land.

McMillin was allowed to build and sell the homes built at Liberty Station at market value, and the city kept ownership of 80 percent of the base.

While every large project has its ups and downs with politicians and environmental groups, Liberty Station has been besieged with attacks that Scott said are unfair.

"I truly believe that the attacks (regarding Liberty Station) are unjust, and the public scrutiny has gone overboard," he said. "Number one, McMillin has fulfilled its contract with the city of San Diego and number two, it's ludicrous that they are accusing us of cheating and lying."

Modern homes, stores, schools and a 46-acre park have been built on the dilapidated base, but the city claims that it won't see any profits from the deal they struck with the local builders. Mark scoffs at the mere mention of it.

"They're seeing plenty of money from this project," he said. "They're getting a ton of tax dollars and I won't get into it anymore than that."

"In the end I think this will turn out to be the best project the city has ever partnered with," Scott said. "Our reputation is very important to us and we're going to stand up and fight if we have to because in the end, this is about our family, not just our business."

"We care about the longevity of this company," he said. "We care about creating opportunities for our employees and for future generations. We're a company that continues to move forward while doing the right thing."