IP is hot property at Thomas Jefferson School of Law

By JULIE CROMER, Thomas Jefferson School of Law
Tuesday, May 1, 2007

In a city where software, multimedia, digital technology and bioscience are ever-expanding industries, Thomas Jefferson School of Law has positioned itself to be the leader in producing San Diego's top intellectual property attorneys. Thomas Jefferson has developed a remarkably strong program with six full-time faculty members and several adjunct professors who all teach intellectual property (IP) law.

Thomas Jefferson includes in its curriculum basic intellectual property courses such as Patent Law, Copyright Law, and Trademarks and Unfair Competition, but expands its curriculum to reflect the practical applications of the field. 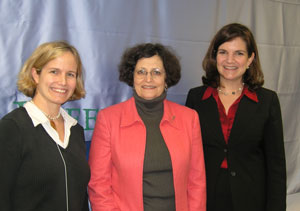 "In addition to offering core IP-law courses, we offer an array of classes that teach students how intellectual property relates to other areas as part of a law practice," said Associate Dean Steve Semeraro. "These areas include antitrust, biotech, client representation and entertainment, the Internet, licensing, patent portfolio management, and the law as it relates to amateur and professional sports."

"The strength of these courses is the professors," said third-year law student Todd Knode. "Each has practiced in the area and is committed to each student's success."

This dedication to an intellectual property law curriculum has led the school to establish the Center for Law, Technology, and Communications (CLTC), which prepares students to address the tremendous impact of technological change and the revolution in communications on virtually every area of practice.

"Thomas Jefferson established the CLTC to help students focus their studies on this area of the law, which has recently exploded in terms of career opportunities and hotbed legal issues," said Professor Sandy Rierson, Director of the CLTC.

In addition to focusing on student course objectives, the CLTC brings academic and non-academic speakers alike to Thomas Jefferson to discuss the most current intellectual property issues. This year, speakers have included the Senior Counsellor for the New York office of the World Intellectual Property Organization and scholars from around the world.

"The very fact that Thomas Jefferson offers a patent claim drafting class is beneficial for those interested in patent law," said third-year student Jennifer Risser. "It was an extremely practical class, the concepts of which I continue to apply at my various patent law internships. Having an exposure to claim drafting definitely gave me an advantage over other interns who have not had the opportunity to take that class."

The commitment of Thomas Jefferson students to intellectual property law does not end in the classroom. Students have graduated to accept IP-related positions in local high-tech businesses and at leading law firms, such as Luce Forward and Jones Day, and alumni nationwide have pursued advanced degrees in LLM programs specializing in intellectual property.

And alumni consistently agree that the IP-law course offerings at Thomas Jefferson have helped.

"Professor K.J. Greene's Entertainment Law was the most important course I took at Thomas Jefferson to help me pursue a career in Entertainment Law," said recent graduate Nikki Barbanell. "My first assignment out of law school was about a major motion picture copyright infringement claim. Without Professor Greene's expertise on the subject, I would not have had the confidence and know-how to complete the task with such ease as I did."

Another recent Thomas Jefferson graduate, Qualcomm (Nasdaq: QCOM) in-house counsel Kristine Ekwueme, had a similar experience: "I wrote a paper for International Intellectual Property with Professor Susan Tiefenbrun on the concept of a worldwide patent system, and two things occurred. First, I discovered this topic was near and dear to the hearts of some of our upper management and my paper was an open door to discussions with these 'key players.' Second, I became aware of a gaping hole in the system -- no one seemed to care about Africa, the role it plays, and the issues that arise in the world of intellectual property today. This has become my passion."

Ekwueme continues to take her experiences from Thomas Jefferson beyond the school and even beyond the United States. "As I bide my time, I am continually presented with open doors," she said. "Just a couple of weeks ago, I had the opportunity to spend time with a delegation of top telecom professionals from several countries in Africa who came to learn about our technology. My excitement was unbearable as they shared their views on patent rights, copyright infringement and deployment of technology in nomadic territories. My path in life becomes clearer everyday, thanks to a little enlightenment in International Intellectual Property, evening section."

In the meantime, Thomas Jefferson continues to expand the horizons of its students and make intellectual property education accessible.

"I thought you had to be science-minded to have an interest in IP," said third-year law student Shelley Baldwin. "But Professor Deven Desai's Trademarks and Unfair Competition class changed that. I have already used some of the concepts I learned at my law firm, and my employer was very impressed."

Knode agrees. "Prior to law school I worked in the computer industry," he explained. "The classes here enabled me to keep working with technology, but reading law instead of code. As a graduating student, I know I made the right choice in attending here."

For more information about the intellectual property program at Thomas Jefferson School of Law and the Center for Law, Technology and Communications, visit www.tjsl.edu or contact Assistant Dean Lori Wulfemeyer at loriw@tjsl.edu.

Julie Cromer is a professor at Thomas Jefferson School of Law.