By ELIZABETH MALLOY, The Daily Transcript
Wednesday, May 2, 2007

There's a reason people stay away from politics and religion in polite conversations: Those discussions tend not to be polite.

Particularly since the 2004 presidential race, pundits have lamented that the discussion of politics in American has been boiled down to talking heads shouting at one another on cable news shows.

But Marjorie Cohn doesn't think that has to be the case.

A law professor at Thomas Jefferson School of Law in San Diego, Cohn is not shy about her politics. She thinks the Iraq war is illegal and that the Bush administration has broken numerous other laws over the past seven years. She has a book coming out in July called "Cowboy Republic: Six Ways the Bush Gang Has Defied the Law." In the classroom, she encourages her students to be just as open, no matter which side of the spectrum they fall on. The only rules are that they respect one another. 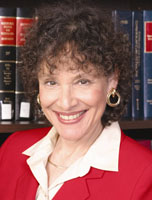 "I don't allow any personal attacks in my classroom," Cohn explained. "That is, attacks based on politics or race, or gender, or sexual orientation, or any other category. I make very certain that students respect each other, and I respect them and they respect me, and I really don't have any problem."

"Those times that I've won the Golden Apple award for outstanding teaching are some of the high points of my life," she said.

In 2006, The Daily Transcript named Cohn one of the top attorneys in San Diego.

Cohn grew up Claremont, the town near Los Angeles famous for its seven college campuses. She went to Stanford undergraduate and became involved in the anti-war movement. That "really set me on the path to becoming a political lawyer," she said. Being involved in politics can be frustrating, she acknowledged, but she writes articles about once a week, does several radio interviews each week and travels for speaking engagements, and that makes her feel like she's making a difference. "It's therapeutic for me," she said.

In addition to politics, Cohn has also become an expert on the issue of television cameras in a courtroom. She authored a book with CBS news journalist David Dow called "Cameras in the Courtroom: Television and the Pursuit of Justice," in which she examines the conundrum of wanting an open trial but not wanting a media circus. She said she was initially opposed to television cameras and Dow was in favor of them, so they "struggled over every word," but she said the result is what she feels is an objective book.

"Basically it's a case by case determination," she said. "The defendant's position should be given great weight -- I would say should be determinative. I think that both the prosecution and defendant should have veto power over the cameras."

She said the appellate courts and the Supreme Court are a different case because there are no witnesses or juries. She is in favor of cameras broadcasting Supreme Court deliberations.

Cohn, who is married to appellate criminal defense attorney Jerry Wallingford, has lived in San Diego for 25 years, working in private practice at first. She said the area, which is famously conservative and pro-military, sometimes made it hard for her to pick juries in some cases, but overall she likes it here.

"San Diego is an easy place to live," she said.

At Thomas Jefferson, where she teaches criminal law and procedure, evidence and international human rights law, Cohn makes no attempts to hide her decidedly leftist views, but she said she doesn't feel a need to. "The faculty is very diverse in many ways, including politically, and there is a real commitment to academic freedom," she said.

In addition to teaching, Cohn is president of the National Lawyers Guild, an alternative to the American Bar Association founded in the 1930s because the bar didn't allow people of color. She publishes articles frequently on her Web site www.marjoriecohn.com, appears regularly on XM Satellite Radio, AirAmerica and has a weekly Monday slot on WBAI radio in New York via Pacifica radio station. Her forthcoming book "Cowboy Republic" follows in the vein of many of her other writings and speeches in taking the current administration to task.

But ultimately, Cohn said she finds teaching to be among her most important work and an area in which she likes all different viewpoints to come to the front.

"We have some interesting discussions in class," she said.