By ASHLEY WOOD, University of San Diego
Wednesday, May 2, 2007

Yvonne Stromer tried to leave her abusive husband for months, but her courage was deflated each time she summoned the strength to leave when her husband threatened to murder her beloved pet beagle, Baby, if she ever left him. Since most shelters for abused women do not allow pets, Yvonne felt she had no other option but to stay. That is, until University of San Diego School of Law student Sarah Speed came along.

"If I'd had the ability to protect my dog sooner, I think I would have left sooner," says Stromer. "Restraining orders can protect cars and furniture. Why not protect something living and breathing?"

Speed agreed, and thus the idea for Senate Bill 353 was bred at the University of San Diego School of Law's Center for Public Interest Law (CPIL) where she was interning. The legislation is designed to allow victims of domestic violence, like Yvonne, to add animals under the protection of restraining orders. When a victim of domestic violence decides to leave their abuser, s/he would have the ability to apply for a temporary restraining order, which would force the abuser to stay away from the victim, the children and the animals. Thus, the abuser would be barred from making contact with the victim's pets under penalty of misdemeanor contempt. 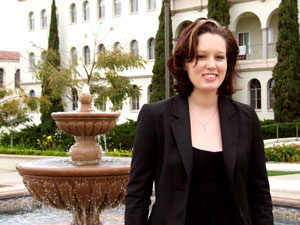 University of San Diego School of Law student Sarah Speed pursued legislation that would allow animals to be specifically named on protective order applications. The bill is set for vote in the state Senate on May 7.

Currently, abuse victim's animals are only under the protection of the restraining order if they are near the victim, which is often impossible as domestic violence shelters do not accept animals. If passed, Senate Bill 353 would allow the animal to be placed with a friend, family member or safehouse program, yet still protected from harassment.

"It was well known at CPIL that I am an animal nut and am a past president of the Student Animal Legal Defense Fund," said Speed. "So when Maine passed a bill to allow animals to be included in protective orders in domestic violence situations, Professor Julie Fellmeth (associate director of the CPIL) sent me the article."

That article inspired Speed to examine California law only to discover that some judges voluntarily include animals in protective orders when the animal's names were included on the application. Other judges, however, considered awarding the custody of an animal a pretrial division of property and would refuse to include animals. Speed's research further revealed a high correlation between domestic violence and animal abuse.

Studies have shown that very few people are more attached to their pets than victims of domestic violence. Regardless of the reason for the attachment, abusers often prey upon this as a means of control.

Armed with these statistics, Speed began her pursuit of legislation that would allow animals to be specifically named -- like other types of property -- on protective order applications.

Animal law is a burgeoning area of law that continually gets more recognition in the wake of catastrophic events like the recent Pet Food recall. Animals are now being added to antenuptial agreements, divorce paperwork and wills. USD has been on the forefront of public interest law for many years, and it is important that blossoming public interest lawyers attend a school that fosters and encourages community involvement and public interest work. Animal law is interrelated with many other growing areas of practice such as criminal law, domestic violence, family law, wills and trusts and environmental law.

"The change in the law is very simple," explained Speed. "Yet, it could mean the world to a woman like Yvonne, who is torn between the desire to leave the abuser and protect herself and the safety of a beloved animal."

Wood is director of communications at the University of San Diego School of Law.