From his 19th floor office in the Wells Fargo building, Jay Jeffcoat has an impressive view of downtown San Diego.

The twin hull-like buildings of the Marriott Hotel glimmer in the distance, seemingly chartering a direct course for his desk. To the left sits Petco Park, its colorful, empty seats anxiously awaiting the Padres' next homestand.

In the background is the long expanse of the Coronado Bridge, the arching structure clearly visible on a quintessential, cloudless San Diego late morning.

With such a daily reminder of the city's offerings, it's no surprise Jeffcoat has become a self-described "cheerleader for everything San Diego." 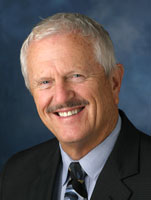 The veteran litigator's latest cause is the Sidney Kimmel Cancer Center.

Jeffcoat, a partner with the global law firm DLA Piper, scaled back his law practice five years ago to serve as vice president of community, public and governmental relations for the cancer center. He was charged with raising the institution's profile in San Diego.

"Nationally and internationally, Sidney Kimmel was always recognized as a great research center," he said, "but because it's not a household name -- Sidney Kimmel is not a local fellow -- a lot people said, 'Well, Sidney Kimmel, where's that? What's that?'"

Jeffcoat's duties entailed everything from leading tours of the facility to making talks throughout the community. He also organized speaking engagements for the center's chief executive officer, Dr. Albert Deisseroth, at local civic organizations and gatherings of the sports and legal community.

The goal, Jeffcoat said, was for Sidney Kimmel to achieve the same local notoriety as the Burnham, Scripps and University of California, San Diego research centers. The organization recently completed another goal -- construction of a 100,000-square-foot research center.

"And so now, when people are talking about the great research engine of San Diego, Sidney Kimmel is mentioned in the same breath with those," said Jeffcoat, who left his official position at Sidney Kimmel in December pleased about the progress the center made during his tenure.

Jeffcoat has always been interested in cancer research, an interest that only grew when he lost his father to colon cancer and saw a close cousin get diagnosed with breast cancer. Thankfully, his cousin has been in remission for six years. As a young lawyer in El Centro, Jeffcoat was a member of the American Cancer Society board.

"We are so close in so many areas of cancer ... on the verge of starting human clinical trials and basically all it takes is money," he said. "There's been a substantial cutback in federal funding of all medical research, but cancer research in particular, so that extremely worthy projects that would have been funded five, six, seven years ago are just not being funded unless you can go out to private philanthropists and foundations."

The Sidney Kimmel Cancer Center, he said, has a pair of vaccines that should go into human clinical trials by early 2008. One involves a vascular targeting mechanism that applies chemotherapy to the tumor with 150 percent more "payload" without any impact on the rest of the body.

"The beauty of this vascular targeting therapy that Sidney Kimmel will be introducing into the clinic is that it doesn't have those side effects because it allows the medicine to be targeted right into the tumor itself, so that's pretty revolutionary," Jeffcoat said.

While he no longer officially works for Sidney Kimmel, Jeffcoat still gives tours of the facility and works on the center's golf tournament committee, recruiting sponsors and donations for the event's silent and live auctions.

"Almost all nonprofits count on their volunteers," Jeffcoat said. "I get on my soapbox and talk about Sidney Kimmel and what it's doing every chance I get to anyone who's willing to listen."

"So it's having those kinds of resources to be able to even better serve clients that I've been serving for a lot of years," Jeffcoat said. "Having the capability of people that are specialized in so many areas just gives me an opportunity to better serve the client." Jeffcoat's practice, not surprisingly, is blossoming. He's taken on nine new pieces of litigation since Jan. 1, including one involving major water issues affecting water districts in Arizona and San Diego's North County.

He's been a business trial lawyer for his entire career, spanning 37 years. In 1980, he helped open Gray Cary's El Centro office, growing the branch to 12 attorneys by 1987. In 1988, he moved to the firm's San Diego office. Currently he's predominately working in products liability and toxic torts and environmental cases.

"I'm extremely energized," Jeffcoat said. "A firm with its commitment to pro bono, to creating a footprint that can serve clients worldwide ... These are great people I enjoy being with. They're committed to the community, they're commitment to their clients, and they're fun people."

"I just have a real strong feeling that lawyers have an obligation to make sure that the underserved, the poor in our society, are defended and protected," Jeffcoat said. "And not just in the criminal context, where laws provide it, but in a civil context, where people are homeless and disabled and unable to afford lawyers."

Active in the San Diego political scene, he has built bipartisan relationships with the local legislative delegation. The connections have been helpful in his many community roles. He helped the Sidney Kimmel CEO talk with San Diego's senators and assembly members about the cancer research center's potential bird flu vaccine. He now has the resources of DLA Piper's Washington, D.C., governmental affairs office as well.

"It's just putting people together that need help, so that they can meet the right people," Jeffcoat said.