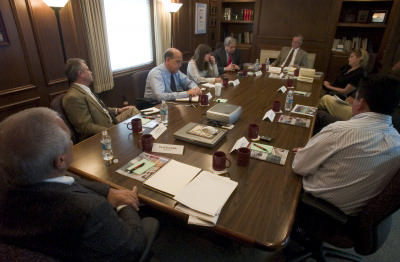 Gabriel Robles, president of the Resort Real Estate Developers Association of Baja California, said he's seen a United Nations map that speculates by about the year 2040, California and the Mexican state of Baja California will essentially be one state.

"My guys always say, 'Which flag is it going to have?'" Robles said with a laugh.

But with more and more American real estate developers building in Baja, that's a question some people in the industry are seriously beginning to consider, and a topic of discussion for participants of a recent Daily Transcript roundtable.

An estimated 200,000 Americans live in Baja, according to Robles. He said the population in Cabo San Lucas is about 90 percent American.

Joel Gamez, a developer with Playa Diamante in Playas de Tijuana, said 80 percent of his business in Tijuana is from Americans. Home Depot (NYSE: HD) and other quintessentially American stores are starting to pop up in the peninsula. Developers said the Mexican government has encouraged development so far, and a lot of buyers purchase property south of the border to experience the new culture. But others "circle the wagons" and prefer to live in a home away from home. How this will mesh in the long term isn't clear.

As of right now, it seems the Mexican government is coming around to the American developers' way of thinking.

"The federal government, the state governments and the city governments understand that the entrance of American players ... is very helpful to the economy," Robles said. The construction work creates well-paying jobs, foreign companies bring foreign money, and American standards are raising some of those in the Mexican government, he added.

David Biondolillo of the real estate company Baja123 pointed out that Cancun, an area of Mexico turned into a resort hub partially by American hoteliers years ago, has since achieved one of the highest standards of living in Mexico. "Because of the development that happened there, it helped everyone that lived there," he said.

But there are some cultural concerns. Rob Raposa, public relations director for the Rosarito Convention & Visitors Bureau, said he knows some people who think his city has become too Americanized. Chris Merson of Meridian Developers agreed.

"Some people are looking for a bit more primitive situation and the Americanization could be a very important issue," Merson said.

Nathan Moeder of London Group Realty Advisors said in the next five to 10 years, Baja will likely see a "second boom." The first was the building of residences, but now the residents who bought all the condos and homes want more services, and since most of the buyers were American, the services will have an American feel.

Dave La Barre of Mi Casa del Mar agreed. "We've seen in the last two years that the developers' association went from being in Spanish to being in English because the majority of us there are Americans."

Though the movement of American developers and buyers into Baja may seem to vastly favor U.S. cultural influence expanding into the peninsula, some developers said the strengthening of the region's economy could bolster Mexican culture as well.

"All this immigration to the United States (from Mexico) is breaking up the Mexican family. You have little towns in Mexico where there are no men," said Robles, of the Resort Real Estate Developers Association. "I think you're going to see a real metamorphosis here."

Ultimately, the exchange of money, labor and culture could end up bringing the countries closer together, at least according to Biondolillo of Baja123.

"In my mind, I think of the European Union, and what they've done there to accomplish the results they've got by joining together as an economic entity," he said. "If we don't do this all the way from Panama to Canada, we're going to have a problem competing in a world market."