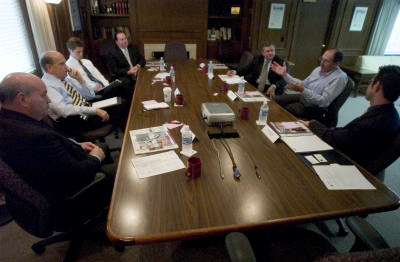 One of the main themes of the current economic environment is that global markets are awash with immense levels of cash fueled by, among other factors, relatively low interest rates.

From real estate mogul Sam Zell's now famous 2006 Christmas card, in which he proclaimed "Capital is falling on my head," to retail-level investors stocking their money-market accounts in anticipation of the next big investment, the amount of money looking for a home is unprecedented, according to experts.

In the San Diego business community, this flood of cash has had some predictable outcomes.

In the first quarter of 2007, the amount of venture capital funding that went to developing companies in San Diego County grew to $606 million, more than twice the amount invested in the same quarter of the previous year, according to an Ernst & Young LLP and Dow Jones VentureOne report.

Part of the growth in investment is because the area is ripe with promising young companies, especially in the biotechnology and health care sectors, which received the majority of the funding.

But low interest rates and the groundswell of capital they helped stir has also created increased competition for investors looking for more return on their money and heightened risk, according to experts.

"There's such a flush of cash right now from a variety of sources," Comerica Bank Senior Vice President Don Starkey said Friday at a Daily Transcript industry roundtable discussion. "You're seeing people, who typically would not assume such risk ... now assuming that risk because of the fact that they're flush with cash and that capital needs to go somewhere."

David Walters, an executive vice president with 1st Pacific Bank of California, says he has seen a growth in net worth on the financial statements of the borrowers that his bank has dealt with.

"They're looking for other places to put that cash," he said. "Now, they're looking to diversify perhaps out of real estate ... and put it into more of these high-risk investments where they can get a better return."

With so much money available to entrepreneurs, the Small Business Administration has seen the number of loans it grants increase, while the overall amount of capital has decreased, a reflection of the growth of smaller mom-and-pop-type businesses, according to local SBA District Director Ruben Garcia.

Garcia said that during the past few years he's seen the growth shift from wholesale manufacturing to the service and construction sectors. He also said he's seen a jump in the number of business run by women, especially those that are Hispanic.

Ralph Mayer, president of San Diego venture-capital organization Tech Coast Angels, said he believes the current liquidity environment will continue, but he is worried what will come next.

"The interesting thing is that at some point it will go down," Mayer said of the abundance of capital.

The question is, he said: "Will it go down nicely or will it crash?"

In the meantime, Mayer said he sees great growth opportunity and profitability ahead for clean-technology companies, or firms that focus on alternative energies or increased efficiency technologies.

"Clean tech is starting to become visible," he said. "It's still pretty small compared with high-tech and biotech, but you can see that it's coming."

He pointed to companies like Escondido-based Hadronex LLC, a company that allows organizations that deal with waste the ability to monitor their facilities in real-time to prevent hazardous spills and illegal dumping. Hadronex was recently named the runner-up at the Tech Coast Angels Quick Pitch 2007 event.

A major force behind the immense growth experienced in San Diego's biotechnology and high-technology sectors during the past 20 years has been the introduction of specialized industry organizations such as Biocom and the San Diego Software Industry Council, according to Ted Roth, managing director at Roth Capital Partners.

He said there is currently an organization under development that will similarly represent the local clean-technology industry.

Roth also noted the trend for venture investment in San Diego County over the last few quarters has seen more money changing hands in fewer deals. The reason is because investors are increasingly opting to invest in more developed companies than has traditionally been the case, according to Roth.

"Two and three years ago (investors) were funding the Phase I and II," which require less of an investment, Roth said of biotechnology companies. "But now they're saying, 'I'm going to wait so I know they have a product that's close to commercialization.'"

He said initial public offerings are increasingly being viewed as financing events, rather than liquidity events, because of the amount of money necessary to invest in and grow the company.

Will the uptrend in venture capital investment in San Diego companies continue?

"The next couple of years may not be as robust, but in the long-term I think it will," said Roth.