General Lock was originally founded as Clark Security Products in 1953 as a product distributor to locksmiths. In 1990, the company began a dramatic rebirth when it was purchased by Marshall Merrifield. Merrifield is a unique entrepreneur who balances the frontier mindset of an innovator with a commitment to old-school ideals of service. While maintaining the standards of a 54-year-old company, he infused the classic goals of quality, service and dedication into the firm's new incarnation. 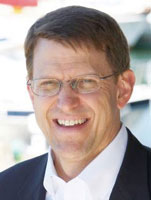 Merrifield's approach to innovation and risk-taking is nearly scientific. He approaches business like a real-world laboratory, experimenting with new business models on a limited, cost-effective scale, pursuing those ideas that show success. With General Lock, Marshall brought together a traditional hardware distribution model, a private-label manufacturing source, and a new business approach of building an independent installation network -- positioning the company to take advantage of consolidation and single-source solutions in the industrial marketplace.

General Lock has developed and built a reliable, cost-effective, contracted network of approximately 1,200 professional licensed installers to service the door and security openings at a growing number of national accounts, including Boeing, Wal-Mart, Disney and a number of government facilities. In 2002, the company began manufacturing locks and keys as well as working with general contractors on new construction. Critical partnerships with new technologies have enabled the company to offer high-tech security solutions such as Blue Wave Security, which manufactures the world's first wireless networked access control system based on Wi-Fi technology.

Under Merrifield's leadership, the company has used the national distribution business with locksmiths and security dealers to build a conglomerate controlled under the General Lock name. General Lock's services have grown to include design, hardware specification, pricing, product supply, installation and invoicing, plus professional project management. General Lock and its sister company, Clark Security, combine to be the largest independent supplier and installer of mechanical and electronic security hardware products to commercial, industrial and institutional end users in the United States.

Mike Mellace began work in his family's corner store at the age of 6. By 12, he was helping his father operate and organize the family business, and by his 16th birthday Mellace had started his own car cleaning business. Along with a gift for working with numbers, the virtues of hard work and determination that Mellace learned in the corner store have helped him in the development of his own company, Mama Mellace's Old World Treats.

After snacking on cinnamon-roasted almonds between sessions at a trade show in Chicago, Mellace and soon-to-be business partner Mike Runion decided to purchase a roaster and offer fresh-roasted almonds at local events and fairs to supplement their income. In honor of his mother's superb cooking, Mellace named the company Mama Mellace's.

Local events soon led to retail carts in area malls, including Carlsbad Company Stores and University Towne Center in La Jolla. When a Costco buyer stopped by a cart one evening, Mama Mellace's was blessed with a demand for more, and Mellace stepped up to the challenge to deliver as a full-time small business owner. Through sleepless nights and long hours, Mellace's skill with numbers and hands-on business knowledge gained back in his mom and dad's store helped him guide Mama Mellace's as it grew.

One of the most extraordinary things about Mama Mellace's is its integration with the Mama Cares foundation, which Mellace founded to lend a hand to individuals, families and organizations struggling to overcome the challenges of their situation. A portion of every purchase of a Mama Mellace's product goes to the foundation to help others around the world. Giving back is one of the primary purposes and foci of Mama Mellace's.

The financial goals Mellace set for the business have not only been met but greatly exceeded, and the brand continues to establish itself. The first business plan has been stretched and revamped and remains fluid to adapt to the company's remarkable success. In the space of six years, Mellace has taken a small almond roasting side business and grown it into a nationally branded specialty snack manufacturer, with a product line carried in major grocery stores like Albertson's and Trader Joe's and mass retailers such as Costco and Target.

When Vincent Mudd set out to buy a division of San Diego Office Supply, he contacted seven banks, and not one would back him without substantial capital input. Finally, after obtaining a second trust deed on their home, Vincent and wife Cathy secured a loan from The Money Store, and San Diego Office Interiors (SDOI) was born.

Although the existing business had operated primarily as a furniture vendor, Mudd had a different concept for the company. Where the usual practice was for the end user to hire a separate architect, interior designer, construction manager, general contractor, furniture dealership and move manager, Mudd envisioned consolidating all of these in one firm. For 16 years, SDOI has built on that revolutionary model, which it calls "office intelligence," to become a full-service commercial design/build office interiors firm.

In 2003, SDOI took office intelligence a step further with the introduction of Design-Build Modular Interiors. These fully modular office interiors feature moveable walls and a floating floor that houses all of the voice, data and electrical infrastructure, as well as offering wireless communications, and conversation and coffee centers throughout the space, all contained in an interior designed to foster real-time communication. SDOI is able to design, build, permit, furnish, integrate and install a fully modular office interior in a period of 12 weeks at a guaranteed maximum price.

Not content with simply reinventing the industry, Mudd continues to seek ways to improve SDOI with new ideas and capabilities. He believes the next step for the company is to add the capacity to negotiate leases. Currently, SDOI becomes involved only after the client has selected a building and signed a lease. Unfortunately, the actual use of the facility often does not fit the client's requirements. Since the lease is already signed, the client may end up occupying a building that costs more than planned, and even after extra expenditure, the space may never work. Becoming involved in building selection and lease negotiation would allow SDOI to provide valuable guidance and savings to clients already served by a company at the top of its field.