By HEATHER CHAMBERS, The Daily Transcript
Monday, May 28, 2007

Quick response times and agile teamwork can help save lives in the event of a life-threatening emergency. But classroom teachings rarely capture the scope of real-life situations.

In an attempt to more closely mimic emergency scenarios, medics at San Diego's American Medical Response (AMR) have employed a new member of their crew.

Tim breathes, speaks, has a pulse and reacts to medication. His tongue can roll back, as if in a state of anaphylactic shock, and he bites. Interchangeable eyeballs -- conveniently stored in a small portable case -- allow for variable pupil sizes. And hooking him up intravenously isn't a problem -- he even has a resealable bladder. 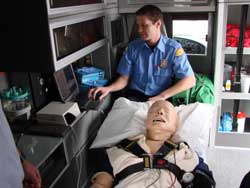 TIM, the simulation mannequin's moniker for Training in Motion, has been traveling from AMR's Kearny Mesa headquarters to the agency's various service areas, centered mostly in the East County, for practice demonstrations.

The simulation mannequin's moniker arose as an acronym for the fully equipped ambulance he rides in, called Training in Motion. For the past two months, Tim has been traveling from AMR's Kearny Mesa headquarters to the agency's various service areas, centered mostly in the East County, for practice demonstrations.

The ambulance serves as a kind of training grounds for AMR employees and the fire agencies it partners with, mimicking the kind of situation that might actually occur during an emergency.

"The reason he's useful in emergency and high-risk levels is you need to react quickly and with a lot of people," AMR medical director Brad Schwartz said.

Although simulation mannequins aren't new to medical training -- the Army found the technology useful in combat training years ago -- the newest models have evolved into life-like figures capable of reacting to medical situations more like humans than ever before.

Equipped with digital capabilities and realistic anatomy, the new mannequins are replacing predecessors with limited features and creating a new dynamic in classroom settings.

"Typically, there's 10 hands and to practice that with all 10 you have to have a mannequin," Schwartz said. "This has really been really forward thinking and great training for pre-hospital personnel."

In the past, Schwartz said mannequins didn't have the ability to react to medical treatments and students would have to imagine the results.

Tim, for example, is hooked up to a software system capable of running pre-programmed and custom test scenarios. Medics respond to his various illnesses by administering the proper treatment based on his vital signs.

"A lot of the mannequins out there are plastic, which don't really work well with electricity," said Mark Neill, an AMR paramedic and research and development technician. "With this, we can run the gamut of the whole scenario."

Although the mannequins can be pricey -- AMR said it paid $50,000 for its model -- the potential for it to help save a life remains an enormous cost factor.

"You have to be able to know how to do it when it does happen," Schwartz said. "You don't want to test them out on a real person."

For San Diego Medical Services Enterprise, the city's 9-1-1 ambulance provider, the simulation mannequin paired with an automated external defibrillator, or AED, gives medics the ability to also assess the strength of their chest compressions and their breaths administered during CPR training exercises.

Dr. Jim Dunford, medical director for the city of San Diego and a professor of emergency medicine at UCSD, said research showed a direct correlation between simulation training and a higher rate of pulse returns.

Although no measurement of the value of life can suffice, he said, the closest means of calculation for ambulance providers is the rate at which they can return a pulse.

"The closer you can get to realizing and putting people in that mindset, the more realistic they appear," Dunford said.

He added a small caveat: "Mannequins don't change blue and don't have moms and dads crying in the background -- but we're getting there."