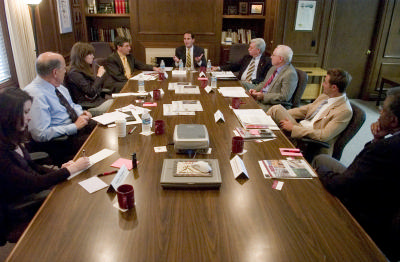 The health care system could use a little tender loving care, at least so say about a half-dozen field professionals who gathered for a recent Transcript roundtable to discuss issues surrounding the industry.

Underfunded operations, the rising costs of implementing technological advances and younger generations interested in earning similar salaries with fewer work hours have taken a toll on the field, participants of the roundtable said.

As technologies have evolved to treat more specific needs, participants said, so have the cost burdens associated with those treatments. An average hospital stay of about six days requires a multitude of technologies, Bardin said.

"The pressures are still on to bring those days down when there may not be a whole lot of room to squeeze anymore," said Dr. Theodore Mazer, president of the San Diego County Medical Society.

The chronic use of ambulatory service has created another set of problems, said Philip Forgione, CEO of San Diego Medical Services Enterprises, the city's 911 provider.

A recent study by the organization found that 933 patients in San Diego accounted for 11 percent of the total ambulatory transportation, he said.

"People call 911 to get out of paying their lunch bill," Forgione said. "What needs to change is the integration of public services and public health."

Dr. Albert Ray, a family physician with Kaiser Permanente in San Diego and an elected board member of the Southern California Permanente Medical Group, said that rather than a health care system, it has become a "sick care system."

"Because we have a sick care system, we're constantly putting a Band-Aid on every little problem and throwing money (away)," he said.

Most roundtable participants agreed that individuals needed to take a more proactive stance in maintaining their health. The usual culprits -- poor eating habits and a lack of exercise -- have also affected the cost of health care as the demand for care increases.

Others said socioeconomic issues, such as a reduction in the number of inner city hospitals, pared with a short supply of treatments for low-income individuals were surfacing as well.

"As hospitals try to flee from inner cities to the suburban centers not only in this county but other counties, we have a significant problem," said Dr. Jerome Robinson, medical director of Southern California Medical Clinic in National City.

Some participants pointed to inner city hospitals lacking the necessary funds to operate.

Richard Liekweg, CEO of the University of California San Diego Medical Center, relayed a story about a recent trip to Singapore, where health care operates on a two-tiered system: private and public.

Individuals decide what their monetary health care contribution will be, giving them a choice of health care facilities depending on what they can afford.

In the United States, he said, "we've got some real economic challenges in order to change our current delivery."