By JAN PERCIVAL, Special to the Daily Transcript
Friday, June 22, 2007

When a man is diagnosed with prostate cancer, he should not have to undergo surgery and chemotherapy if the malignant cells in his prostate gland more than likely will be slow growing and not spread to create other malignancies in his body.

And "watchful waiting" should not have to be the physician's mantra to a patient whose PSA test is positive, but whose biopsy did not uncover malignant cells in the prostate gland, located at the base of the bladder.

"No one wants to spend the rest of his, or her, life being retested frequently for cancer and worrying whether it will finally occur," said Michael McClelland, Ph.D., professor and director of Cancer Genetics at the Sidney Kimmel Cancer Center in San Diego. The nonprofit research institute on Torrey Pines Mesa was founded in 1990 and is dedicated to the development of advanced biological cancer treatments, such as gene therapy, angiostatic therapy, vaccine therapy and immunotherapy, and to making those treatments readily available to patients. 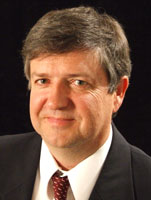 McClelland wants to improve the diagnosis of prostate cancer -- specifically the testing that follows the finding of an abnormally high prostate-specific antigen, or PSA, in the patient's blood. He envisions a testing method that will distinguish slow-growing prostate cancers from the malignancies that are life threatening and thus should be treated with radical surgery and chemotherapy.

"It is estimated that prostate cancer grows and spreads in less than 20 percent of men with positive PSA tests and biopsies," McClelland said. "Those are the patients who need the treatment."

Because physicians cannot yet predict whether someone has the aggressive or indolent (slow-growing) type of prostate cancer from a positive PSA test or a tissue biopsy, many men are unnecessarily having radical surgery and chemotherapy, the possible side effects of which are incontinence, impotence and life-threatening infection.

A reliable genetic test that could help men avoid risky surgery "is absolutely necessary," according to Otis Brawley, M.D., associate director for cancer control at the Winship Cancer Center at Emory University in Atlanta. "Any test to distinguish the prostate cancers that need treatment versus those that need to be watched and may be even ignored is a tremendous advance."

McClelland and his colleagues at SKCC and the University of California San Diego are examining the activity patterns -- or molecular signatures -- of the genes in the cells of 600 prostate tissue samples. The samples come from several San Diego area hospitals whose patients provided their complete medical histories as well as their consent for the tissue donations.

"On the molecular level, every cancer is different from every other cancer," McClelland said. "It is likely that aggressive cancers utilize different genes than do prostate cancers that are slow growing and do not metastasize."

Prostate tumors contain both malignant and nonmalignant cells, he added. The ability to distinguish between the two will be critical for understanding how aggressively the cancer is growing.

The molecular signatures that emerge from the analysis of the gene activity patterns will be categorized according to the stage, or severity, of the disease, as well as medical and family history, and outcome of the patients.

Armed with this data, McClelland and his team will be able to create a DNA biochip that will "read" the molecular signature of individual tissue samples. "We hope the biochip will lead to more accurate diagnosis and prognosis," he said.

And, as a result, fewer men will unnecessarily undergo radical surgery and chemotherapy, and there will be no more anxiety-producing "watchful waiting."