By TANYA KURLAND, Special to the Daily Transcript
Friday, June 22, 2007

Nurses and health care professionals seeking the employment help of AMN Healthcare may feel confident knowing that its chief clinical officer and executive vice president of operations will have their best interest at heart. She, too, used to be a nurse, and knows personally how important it is to put a person in the right position at the right place.

"Nurses feel confident when talking with someone who is knowledgeable about the position or hospital," Marcia Faller said. "It's essential in the organization that has thousands of nurses when the executive position is a nurse."

There are more than 40 registered nurses that work in leadership positions for AMN Healthcare (NYSE: AHS). The company, headquartered in Carmel Valley, is one of the leading staffing companies in the country that focuses on placing nurses, allied health care professionals and physicians for short, long and even permanent positions at hospitals of their choice. The company currently has more than 7,000 health care professionals working on contract assignments at more than 1,500 different health care facilities, according to Steve Wehn, senior vice president of corporate and community development. 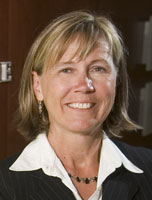 Faller earned her bachelor of science in nursing from the University of Arizona and worked as a staff nurse and manager in intensive and coronary care. She came to San Diego in 1984 managing nurse recruitment operations for Sharp Memorial Hospital. She joined AMN in 1989, then a privately held firm, as vice president of nursing taking on many responsibilities -- reviewing applications, contacting hospitals, setting up the housing, checking references. Now, nearly 18 years later, the company has grown to include 600 employees at its San Diego headquarters.

The company opened its doors in San Diego in 1987 and has expanded throughout the country in cities such as Irvine, Denver, Charlotte, Atlanta and Ft. Lauderdale, as well as internationally in the U.K., Australia, India and Singapore. In 2002 it went public.

"If you don't change how you're doing things you can't be efficient and get to the next level," Faller said of the company's commitment to enhancing its program. AMN contracts with hospitals looking for assistance in their medical departments. Nurses and health care professionals usually contact AMN about signing on to its program.

"They usually hear about us through word of mouth or find us on the Internet, which has been a great marketing strategy," Faller explained.

After a phone interview, prospective employees will have their resume reviewed; credentials and licensing screened; background checked; complete a full physical; and show proof that all their vaccines are up to date.

The company, with the assistance of Faller, recently built its own computer system that helps match the assignment with the person best suited for the position. It looks at experience, where they want to be located, and how long they are interested in pursuing the assignment.

"We wouldn't place anyone who didn't qualify for that specific position," Faller said.

AMN then notifies the hospitals of the intended employee. Hospital officials then conduct a phone interview with the prospective nurse or physician, who is notified within two to six weeks about job status. Housing assistance is provided a well.

Short-term positions send employees on assignments anywhere from four weeks to 13 weeks; long-term is considered 26 weeks or longer. Permanent positions are usually given to physicians only.

Travel health care is an appealing career option, Faller said. Many take the opportunity to be closer to family or to spend time in a city or region they have always wanted to visit; or to test out an area before committing to it. Some could work in a prestigious hospital -- an opportunity they might not otherwise get.

"This is such a great opportunity for nurses. I don't think this type of (program) is really available in other professions," Faller said.

The venture was first utilized in Florida to help fill the hospital shortage of nurses needed in the winter, when tourists and seasonal residents flocked to the state.

With baby boomers eventually needing hospital care in the next decade, the need for health care professionals will be in high demand. However, it is expected that 1.4 million nurses will be retiring in the next 10 years, Faller said. The industry anticipates a nursing shortage of 1 million by 2020, she added.

Faller and AMN support the campaign led by the Council on Physician and Nurse Supply seeking government funding for more classes, teachers and hospital schools. While obtaining her master's and Ph.D. in nursing from the University of San Diego, Faller's goal is also to publish articles stressing the needs and benefits of promoting financial assistance for the health care industry.

"We want the best (nurses, allied professionals and physicians). We are talking about dealing with people's lives ..." Faller said.