By VINCE HEALD, Special to the Daily Transcript
Friday, June 22, 2007

SYHC has been recognized by various public/community health authorities as a leader in the development of innovative, community-based initiatives for the delivery of comprehensive integrated health care services. 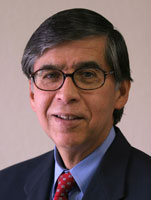 In recognition of his health care advocacy for seniors, Martinez was appointed by President Bush, acting on the recommendation of his Policy Committee, as one of only 22 members nationwide to serve on the Advisory Committee for the White House Conference on Aging. He served as discussion leader for a group of about 14 delegates on the issue of Medicare Reform, with a specific focus on developing a group consensus that dental, vision and hearing presented major gaps in the Medicare system that impacted the quality of life for seniors.

Martinez has been involved with numerous initiatives that have been well received by the community. These include a community outreach/education project focusing on health promotion measures; an infant oral health program offering family-centered disease prevention services; and a cross-border HIV/AIDS outreach and education program targeting a growing population of at-risk Latinos.

In the area of oral health, Martinez has played a leadership role in educating elected officials, health professionals and the general public about the importance of developing dental public health services, particularly for the young and frail populations. His efforts in the area of fluoridation proved to be effective in securing the city of San Diego's approval to implement fluoridation of its water supplies.

Within the South Bay and San Ysidro, Martinez, with support and direction of the SYHC board of trustees, spearheaded an expansion project to create a new 25,000-square-foot Maternal & Child Health Center. This center will provide pediatrics, prenatal care, children's dental, early child development services, immunizations and social services for families. The expansion of these services has been identified as a top priority for the health center's patient populations. Given the increasing number of families without health insurance, Martinez said, SYHC anticipates that the proposed clinic expansion will serve several thousand uninsured children each year. To build the project, SYHC's board established a $17.9 million fundraising goal. With the help of a $5.2 million capital grant from San Diego's First 5 Commission, Martinez's management team raised approximately $7.25 milliion of its $17.9 million goal. Construction of the Maternal & Child Health Center broke ground this year.

Martinez has also taken an advocacy role in the area of universal health insurance in California. He noted that community health centers (CHCs), founded in the 1960s, have clearly demonstrated that they can deliver affordable, high-quality, culturally competent services to low-income, uninsured populations. Currently, there are 600 CHCs statewide serving 3.4 million patients in both urban and rural communities. In San Diego County, the regional community clinic network consists of 17 health centers that provide health services to approximately 500,000 area residents.

SYHC and other health centers that receive federal funding to provide safety net services offer patients a comprehensive scope of preventive and primary care services, including pediatrics, ob/gyn, adult medicine, mental health, dental, case management and social services. Community health centers have received national recognition for pioneering a number of innovative strategies for delivering health services to high-risk, traditionally underserved populations. Many of these strategies are programmatically aligned with the fundamental values of universal coverage. In the clearest terms, according to Martinez, CHCs are well positioned to play a key role in implementing Gov. Arnold Schwarzenegger's bold vision for expanding health care access to millions of uninsured Californians.