Flanked by a tall tower of buckets representing the 173 gallons of water that the average person uses each day, San Diego Mayor Jerry Sanders opened the press conference with a crack about the Sunroad controversy, reassuring that the tower "is within FAA height limits." 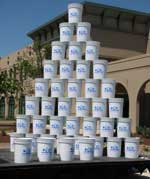 But the mayor made it clear that water conservation is no joke this year, with San Diego in its driest season in more than 100 years and the Colorado River, the source for most of San Diego's imported water, in its eighth year of drought.

"So far this year, San Diego has received only 37 percent of its expected rainfall," the mayor said, adding that San Diegans have responded well to past calls for water conservation.

Despite population increases, the city used the same amount of water in 2006 as it did 15 years ago.

"For now, San Diego has an adequate supply of water ... But we need to be ready should this dry weather pattern extend another one, two or three years," he said.

To serve as an example, the water authority completed a landscaping project Wednesday that incorporates drought-tolerant plants and grass alternatives, designed by Pamela Homfelt. 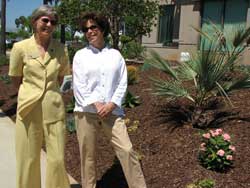 With plants that need to be watered only three times a year, water-friendly landscaping is an effective way for businesses to save water and money.

"Saving water can save businesses and save jobs in California," said Ruben Barrales, president and CEO of the San Diego Regional Chamber of Commerce, explaining that the 1987-92 drought caused mandatory water-use restrictions, which were a "challenge to everyone, especially our life science industries."

"Companies look at that (water supply) when they're making decisions to either locate or expand to the region," said Thomas Wornham, director of the San Diego County Water Authority. "Investing in water supply reliability is just as important as investing in transportation, technology or other infrastructure elements when it comes to attracting and retaining businesses, and sustaining San Diego's $150 billion economy."

"When you consider that an acre-foot sustains the needs of two families for a year, it's clear that these investments will pay significant dividends," he said. "Our challenge is to all business leaders and their employees to conserve at the workplace."

A representative from San Diego Gas & Electric explained that heating and treating of water is the second largest source of energy consumption, so saving water could save energy, and money, for businesses.

Fern Steiner, chair of the water authority board of directors, said "2008 will be extremely difficult if these conditions persist and we do nothing." If all San Diegans follow the "20-Gallon Challenge," Steiner said, "We would save 65,000 to 67,000 acre-feet of water."

The San Diego County Water Authority supplies the county's 3 million residents with about 90 percent of its potable water supply, distributing it through its 24 member agencies.

For information and a list of ways residents or businesses can save water, visit sdcwa.com, or the city water department's Web site at sandiego.gov/water.

Send your comments to editor@sddt.com