Tanned and affable, Phil Petersen claims he isn't as easygoing as he appears.

"I've always been competitive," he said in a recent interview. "I've always worked hard. I actually had people tell me I'd be here one day."

"Here" is his new position as president of Dynalectric San Diego. 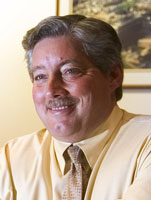 David Raspolich, who has been president of the San Diego office since opening it in 1985, said: "Six or seven years ago, we started grooming Phil for the position. He was a standout in the field."

Petersen, who celebrated his 50th birthday in June, was a field electrician in the apprentice program in 1988. He'd never worked in an office until Raspolich tapped him for project manager of the Koll Center four years later. Six years after that, Petersen was promoted to executive vice president and has been running the day-to-day operations since.

"I targeted him early on as someone who would move up," Raspolich said. "Phil is one of the most intuitive people I've met. He understands our success depends on our relationships with our customers. He has established some great client relationships over the years. He is well-liked and respected.

"He's been doing the job for the last two years," said Raspolich, who will take his mentoring and oversight skills to manage succession plans in Dynalectric's Western region. "The transition will be seamless. People won't even notice a difference."

Petersen credits the company's longevity to the depth of projects completed over the years for repeat clients such as ROEL Construction Co., Swinerton Builders and DPR Construction.

"We don't specialize in TI, or large hotels or pharmaceutical plants," he said. "We do it all. We have a process where we plan upfront that allows us to change as the market cycle changes."

Tenant improvement contracts have been a constant source of revenue for the company, which has done all the tenant improvements for downtown's One America Plaza and 655 Broadway. According to Petersen, Dynalectric's projected 2007 revenue of $90 million include $25 million in TI projects.

The $10 million electrical TI contract is the exception rather than the rule.

"A good-sized contract is in the $250,000 range, but most of them are much smaller," Petersen said. "They're not large jobs." Electrical work in the TI market is competitive because it's simple, fast and the cash flow risk is minimal compared with the financial resources required for design-build projects.

"We've remained competitive because of our pre-fab capabilities and our clients have been loyal," Petersen said. "We do a lot of repeat business in that area. We just got a $5 million TI for Grossmont Hospital -- three floors in the critical care unit."

Petersen is quick to give credit where it's due.

"Our TI group has maintained a consistent level of projects over the years," he said. "We're probably one of the few union electrical contractors that do that."

"A new building goes up and people want to be the first in," he said. "It creates a domino effect throughout the city, people moving from one area to another, trying to upgrade their surroundings."

"I see inklings of it now and then," Gilbert said. "It hasn't hit completely yet. It's the next wave."

With a project backlog stretching beyond 2008, the future looks promising for the company and San Diego.

"I don't see San Diego slowing down," Petersen said. "There are a lot of projects coming up: resort, secondary education, government housing."

Petersen's challenge is to keep the company exciting so it doesn't become stale in the marketplace.

"We'll keep doing as we've done in the past," he said. "The same way I got here: by letting the people in the field have the power and the knowledge and the responsibility to get the job done."