Kraig Stahl and Greg Loy don't mind that the company they co-own is small -- for now.

Stahl and Loy's firm, Poway-based K.D. Stahl Construction Group, just started two and a half years ago, but the pair has decades of experience between them.

Stahl, K.D. Stahl president, who worked for 15 years at R.G. Petty Construction (now known as Ledcor), said the Petty family taught him all he needed to know to eventually strike out on his own, which he did in January 2005.

"I got my contractor's license with their (Petty's) support," Stahl said.

Operating on a shoestring budget using Stahl's own funds the first year, the company started with just three employees, not including Loy, who came on board in August 2005. The firm, which has 10 employees today, posted about $4 million in sales during its first full year in 2006. Stahl projects this figure will climb to between $6 million to $7 million for 2007.

"I want to build without letting growth get away from us," Stahl added. 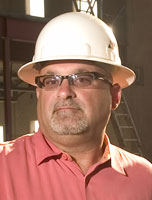 "By choosing a general contractor that participates in virtually every aspect of the project, construction costs and schedule can be maintained and quality can be upheld," the firm states in its promotional literature.

Stahl, who grew up in the San Diego area, and Loy, who last worked for numerous years with the Sundt Corp. and Ninteman Construction (purchased by Sundt in 1989), have teamed up on an array of jobs for their new company.

One of those was a small building for a San Diego Bail Bonds office operated by King Stahlman at First Avenue and C Street.

"We are family friends with Stahlman. These jobs are about relationships we've developed in the past," Stahl said.

A job that the company is nearing completion on is the $3.6 million, two-story, 44,750-square-foot, concrete tilt-up building known as the Ruffin Business Plaza at 5055 Ruffin Road.

In late January, Stahl completed a facility for SKG Motorsports at 14007 Poway Road, Poway. The $1.2 million project consists of a two-story masonry-block building with 4,259 square feet of high-end custom automotive design and components, as well as a service shop.

In late summer of last year, K.D. Stahl completed the $2 million 4S Ranch Library. That facility was completed in the early spring of this year. The firm also constructed a small sheriff's substation at this same location.

"It was a total of about $4.6 million for both elements," Loy said.

"It will have all wood floors, a three-car garage and an attached granny flat," Stahl said. "We are awaiting permits on that."

Looking ahead, Stahl's firm continues to build custom homes and an array of tenant improvements from Poway to the South Bay. The contractor is currently developing tenant improvements for a Pacific Island-themed restaurant in the Eastlake Village shopping center in Chula Vista, and Stahl said he is also building a space at the same center for an Asian restaurant that is too early to identify.

Stahl said the custom home building business, on which the firm depends, should remain quite strong, even with the collapse of the rest of the homebuilding industry.

Stahl concedes he is more concerned about commercial construction.

"We keep hearing that there is a lot of space out there," Stahl said.

"I do worry about a recession," Loy added.

But Stahl and Loy are quick to point out that the times are much easier than when they were just getting their business going. Two and a half years ago, construction material costs, particularly steel and concrete, began to spiral out of control.

"It hasn't changed that much lately, but two to two and a half years ago, we were seeing prices go up on a daily basis," Loy said.

Stahl said he has noticed business becoming a bit more competitive, however.

"We will still do a lot of private work, and we will do a little public work as well," he added.

In conclusion, Loy said while he doesn't mind building commercial construction or custom homes, there is one type of construction the general contractor shies away from: "The only thing we won't do are condos."