By RANA KAY, Special to the Daily Transcript
Tuesday, July 10, 2007

From the downtown core to Point Loma, everywhere you look in San Diego architecture tells a story about the area's history. While much of the city has experienced a dramatic renaissance, great care has been taken to preserve the historical design and keep that story alive. However, the art of making something old, new again requires creative planning and unique expertise to retain historical integrity during redevelopment.

Something old, something new

One of the most recognized historical redevelopment projects in San Diego is Liberty Station, a mixed-use community located at the site of the former Naval Training Center (NTC). San Diego-based KMA Architecture & Engineering was tapped to design the community's new office district. The firm, whose portfolio boasts some of the most exciting new mixed-use developments in town including Aperture in Little Italy, Park Terrace in the East Village and Grigio in the downtown core, faced some unique challenges when tasked with designing a new building that would need to meet the NTC's guidelines for the new buildings in the Historic District.

"Our team at KMA was very excited to combine our historical and commercial expertise for Liberty Station's office district," said Neville Willsmore, principal at KMA Architecture & Engineering. "The new construction needed to incorporate architectural details from the period but still feature the comforts of modern design as well as meet current guidelines such as Title 24 requirements."

The final result was a compatible blend of old and new, a dramatic reflection of history that marries historical architecture with the current standards of energy efficiency and sustainable design. KMA's design references the historic buildings on the site with archways, clay-tile roofs and colonnades, while incorporating efficient details such as double-glazed windows that earned one of the buildings a LEED Silver Certification from the U.S. Green Building Council.

Prior to design, the process starts with historical documentation, which is required to accurately recreate the original features. For Liberty Station, this meant measuring the surrounding buildings, identifying details based on old photographs and even conducting laboratory tests to determine original paint colors. David Marshall, president of Heritage Architecture & Planning, a firm specializing in historical preservation and documentation, worked with Heritage's Brian Rickling and KMA to accurately reflect the design of the former NTC site.

"The objective is to incorporate historical features into the developments but still provide a clear difference between the old and new buildings," said Marshall. "We studied old photos of the buildings and reproduced some of the unique touches such as the original colors and the old light fixtures in the arcades. The spirit of the NTC is very much alive in these new buildings, which is exactly what we wanted to achieve."

KMA and Heritage also teamed up on the design for Deca, a $23 million mixed-use development in the Uptown area of Hillcrest. Like Liberty Station, the new building needed to reflect the style of a historic building on the site. This time the design replicated the Streamline Moderne style of architecture of the 1930s, characterized by the existing one-story structure. 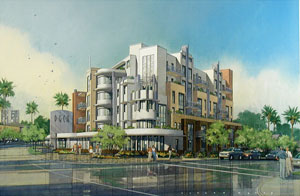 "The original building did not meet current codes and would not have survived," said Willsmore. "The solution was to demolish the existing structure but retain the original ground floor façade and footprint."

After extensive laboratory testing, Heritage Architecture's project team was able to determine the existing structure's original color scheme of white and silver. Also, the original narrow depth of the storefront was re-created to maintain the building's historical appearance. KMA then implemented Streamline Moderne features such as silver doors with round glass galley windows, gridded glass block accents, prominent canopies and geometric shapes. The result is a tribute to some of the most glamorous days of San Diego's past.

For the Liberty Station Office District and Deca, the plan was to create an all-new construction project inspired by history. However, in the case of a 159-room urban luxury resort in the Gaslamp Quarter and two landmark buildings in the Ballpark District, designers were able to retain the original structures while bringing them up to today's standards.

Plans for the new Ivy Hotel, owned by San Diego's Kelly Capital, essentially called for a brand new building inside of the historical shell of the former Maryland Hotel. The $90 million price tag for the renovation makes it clear that the owners spared no expense in preserving the historic façade while creating a structurally safe building encompassing a contemporary hotel, restaurant, nightclub and rooftop pool and entertaining space. Architects and contractors came up with some creative tactics to pull the project together. San Diego-based TSA Contracting worked to get the project completed by spring 2008. 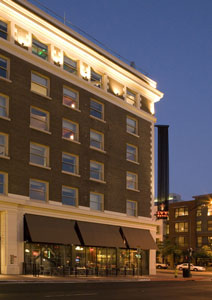 Owners of the $90 million Ivy Hotel created a contemporary urban resort while preserving the historical shell of a downtown landmark.

Typical of all historic renovation projects, walls were demolished and new challenges were revealed throughout construction. The building's original columns were removed to create more open space, which required additional reinforcements added to ensure the structure was sound. In addition, designer Powerstrip Studios incorporated stone, glass, metal and wood to emphasize that feeling of strength and security.

On the other side of downtown, TSA and a team of architects and engineers were tasked with the renovation and seismic upgrade of the historic Showley Brothers Candy Factory and Schiefer & Sons buildings, built in 1924 and 1910, respectively. The old buildings were able to be preserved, while being renovated to create future commercial and retail space.

The Showley Brothers Candy Factory, originally positioned right in the center of the current Park at the Park, needed to be partially disassembled and moved to its new site one block east, adjacent to the ballpark. TSA Contracting was tapped to reassemble the ground floor of the building using the original bricks and windows, while bringing it up to current seismic standards.

"To truly respect the significance of these structures it is important to preserve as many of the existing materials as possible," said Terry Arnett, president of TSA. "For instance, 100-year-old glass is much different than today's glass. It's less clear and has more imperfections so it's easy to tell when it isn't original. Oftentimes we will partner with salvage companies to collect the glass from demolished buildings. It can mean additional work and sometimes more money, but going that extra mile adds exponentially to the historical integrity of the building." 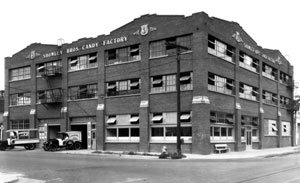 TSA Contracting was hired to reassemble the ground floor of the historic Showley Brothers Candy Factory one block east of its original site (photo circa 1926).

Making sure the two buildings were structurally sound was a priority for the design and contracting teams. For the Schiefer & Sons building, KPFF Consulting Engineers designed a number of caissons for the building to add concrete support to the structure. And after rebuilding the brick structure of the Showley Brothers Candy Factory building, TSA reinforced the masonry shell with a new steel moment frame, which required them to shore up the entire building. However, a desire to retain the old wood beams posed a new challenge.

"Back in the early 1900s when this building was constructed, the wooden beams were measured true-to-size, unlike today's beams which are slightly larger," said Arnett. "There are so many little details that make it very important for developers to hire a team with experience in historical renovation for projects like these."

Studio E Architects and Heritage Architecture both consulted on the East Village projects and re-created some of the special details of the buildings which will help to keep their stories alive for generations to come. With testing, the team determined that the historic candy factory originally featured exposed red brick, which had been painted over white numerous times. The color had to be painstakingly stripped away to expose the rich red brick once again. After studying old photographs of the building, the original signage was found and will be re-created. Both restored buildings will look almost exactly as they did more than 80 years ago.

For developers, hiring a team of architects and contractors with expertise in renovating historical structures can help save time and money when it comes to addressing the challenges associated with working with older materials and accurately preserving history. And it's worth it to do the research. While it's easy to fall in love with the sleek, modern architecture decorating San Diego's newest neighborhoods, it's the rich, detailed design of the past that helps to keep the story of San Diego's history alive.

Kay is an account executive with Benedetto Communications Inc.