Imagine a five-building office campus featuring spectacular ocean views adjacent to the world-renowned Torrey Pines Golf Course, site of the 2008 U.S. Open, and located in one of the most dynamic, expanding economies in the country with one problem -- a historic tenant exodus and an astounding 60 percent vacancy rate.

The cause of the low occupancy was a property that had been in disrepair for several years. Decades of deferred maintenance had resulted in a long list of deficiencies that included inefficient mechanical and electrical systems, deteriorated plumbing, leaky roofs, barriers to the disabled and energy inefficiency.

This was the challenge that Steve Muller, his partner Rockwood Capital Corp. 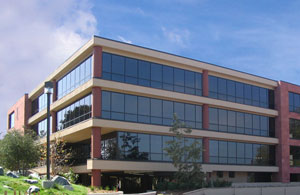 "Initially, we planned a limited upgrade to give the project a more attractive, up-to-date appearance," said Steve Muller, president of The Muller Co., headquartered in Laguna Hills, Calif. "However, the more we studied our options and considered the stunning site, the more we realized that a complete overhaul was the only appropriate choice for the three vacant buildings, which total approximately 125,000 square feet."

The result is an extensive $26 million renovation of these three buildings in the newly named Torrey Pines Court La Jolla.

"This property needed a complete rebuild to remove past negative connotations associated with the poor condition of the vacant buildings," said Jay Alexander, a senior vice president and one of the leasing representatives from Colliers International. "Our strategy was to create exciting, new Class A office buildings. After conducting a detailed tenant analysis, it was clear that the opportunity was at the high end of the market. The renovation budget was set so that the new buildings could compete with the top developments in the area. Location and building quality would be the keys to the project's success."

"Our guiding principle in this process was to achieve Class A quality with full ADA and Title 24 Energy Code compliance," Fragapane said. "In addition, we were committed to satisfying the current building codes and to performing a voluntary seismic retrofit. These basic goals influenced every design and construction decision."

The rebuild has resulted in improved views and modernized lobbies, and has created functional spaces out of previously unusable areas while incorporating many of the latest green design principles. The completed buildings will be some of the most energy efficient in San Diego.

The Muller Co.'s efforts did not stop at the building line. An important part of the renovation included a complete site redesign to enhance traffic flow and restore a natural Torrey Pines feel to the property. Most of the non-native landscaping has been replaced with native species that are naturally drought tolerant.

Walking paths, natural meadows and numerous outdoor seating and common meeting areas have been added. Even the newly renovated health club, with shower and locker facilities, is country club-like. There are oceans views across a Zen garden and a sliding glass wall opening to an outdoor exercise area -- one of the most spectacular in San Diego.

"We wanted to create an environment that would foster the tenants' enjoyment of the beautiful site and superb weather conditions in the area," said project architect Andy Darragh.

The new design features a sophisticated look with softened earth tones and natural materials such as sandstone, travertine and mahogany, as well as a unique use of recycled sorghum stalk paneling in the elevators and lobbies.

In homage to the original design, the existing redwood Glulam beams have been recycled into benches and seating throughout the project.

Due to the complexities of staging a phased renovation on an occupied site, Bycor Construction assigned Senior Superintendent Pete Rohers to the project three months before work commenced.

According to Rohers, "Close coordination with the property manager and the tenants is essential on these types of projects."

In the three buildings currently undergoing renovation, the National Oceanic & Atmospheric Administration has leased 44,000 square feet and various tenants have signed letters of intent for an additional 20,000 square feet. "The project will be 50 percent leased before the first building is complete," Alexander said.

Extensive renovation plans consistent with the new design theme are in the works for the remaining two buildings, which are nearly 100 percent leased and total approximately 75,000 square feet.

The initial scope of work will include needed improvements to the HVAC system, elevators and roofing. Subsequent improvements will feature exterior and interior cosmetic upgrades.

"Torrey Pines Court La Jolla offers the science and research community in San Diego an unequalled tenant environment," said Senior Property Manager Christina A. DuCoté. "Where else can you experience Pacific Ocean views across a U.S. Open-quality golf course with hang-gliders in the distance, adjacent to a walking path leading to Torrey Pines State Reserve trails? Torrey Pines Court is something special."