Finishing touches all that remain for North County private school

Teachers are hired, students are signed up and just a little wiring work and some landscaping remain before Pacific Ridge School, a new private school in Carlsbad, opens Sept. 5.

Until then, administrators are "buttoning up a lot of things," said Philip Hitch, director of finance.

The school will be the only independent, non-religious school of its size in North County, and will be based on a traditional model similar to The Bishop's School in La Jolla or Francis Parker in Linda Vista.

Eventually, about 500 seventh through 12th graders will attend Pacific Ridge, located on El Fuerte Street in the Bressi Ranch area of Carlsbad. For the coming school year, 107 seventh and ninth graders from across North County are enrolled. 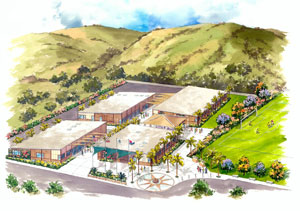 An artist's rendering of Pacific Ridge School, a junior high and high school set to open this fall in Carlsbad.

The 7.3-acre campus, designed by Carrier Johnson Architects and built by Swinerton Construction, is essentially complete. It consists of four manufactured buildings -- one for the high school, one for the middle school, one with administrative offices and another with labs and other more general spaces. The structures, made by Modtech in Perris, Calif., came as dozens of individual units and were put together to create 10,000-square-foot buildings.

The buildings are in place, awaiting inspection before the school year starts. Everything should be ready soon after the teachers start work Aug. 6, Tschann said.

Between the middle school and high school buildings, the school has 14 classrooms. The buildings are "really tailored" to the needs of the school, Tschann said, with teacher workrooms, open spaces for students to congregate, and rooms designed as science labs.

"They don't feel like manufactured buildings; we've put a lot of work into them," Hitch said.

Hitch describes the campus and buildings as "light and airy." Some of the buildings have skylights.

Including land and construction, the project cost about $12 million. Builders broke ground Feb. 27, turning the campus around in just a few months.

"We couldn't have done it without manufactured buildings," Hitch said.

The structures surround a "Town Square" outdoor area. The campus also has a soccer/lacrosse field, tennis courts and a covered basketball/volleyball court.

The campus blends in with the surrounding area, Hitch said.

"It's not an intrusive site," Hitch said. "We did that on purpose, to be good citizens of the community."

The idea for the school began in 2002, when Scott and Fiona Bechtler-Levin and Ginny Merrifield saw a lack of similar private schools in North County and thought about building their own. Other families soon joined in.

The school has raised about $20 million, including about $7.5 million from 100 individual donors and bank loans to cover the cost of the buildings. Eileen Mullady, who ran Horace Mann School in New York, was hired as Head of School in 2005. Tuition is set at $19,000.

Global engagement and preparing students for college and the world beyond are emphasized in the school's mission statement, said Bob Ogle, academic dean. The school will teach students through an integrated academic program -- ninth graders, for instance, will focus on the theme of ethical responsibility, with curriculum revolving around questions such as "Who should own water?" and "What should our relationship to nature be?"

Community involvement is also one of the school's goals, and administrators hope to set students up with service projects such as lagoon restoration and recycling efforts.

They've also been approaching local companies to discuss arranging internships for older students. Though their students won't be old enough for a few more years, Tschann said administrators have talked with companies including Invitrogen Corp. (Nasdaq: IVGN) and Taylor Made Golf Co.

"In every direction we can manage, we'd like our students to participate locally," Tschann said.