How the business community helped an educational nonprofit succeed

Today, the foundation continues to teach gifted, low-income students, and with help from AIRSIS and others in the local business community, HDF has expanded to a second school district, will help about 160 students this fall, and is hoping to bring gifted programs to charter schools.

HDF was founded in 1998 and works with the San Diego Unified School District and, starting last year, the Escondido Union School District to identify third through fifth graders who score in the top half-percentile in gifted tests and also qualify for free/reduced lunch programs. 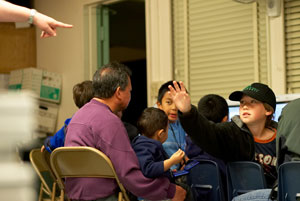 Through the Open Gate program, local university students tutor the students each day, filling them in on basics they might have missed, while keeping them intellectually challenged.

"They're so bright, they tend to think very fast and get bored," said Marjorie Fox, HDF president and CEO.

These highly gifted students often have behavioral problems because they are impatient with regular schooling, Fox said, and are particularly vulnerable to temptations like gangs, drugs and crime to relieve boredom as they grow up. HDF puts students in classrooms together with others who think like them, and provides funds for materials, extra field trips and guest speakers.

The organization's first few students are headed to their freshman year at colleges including San Diego State University, the University of California, Santa Barbara and UC San Diego.

The foundation was selected in 2001 as one of the first two "investees" of the San Diego Social Venture Partners, which uses an investment approach to support nonprofits. Since it opened, its 140 partners have given $6 million in cash and services to 15 different nonprofits.

SVP looks for nonprofits with good ideas and a "human spark plug" at the head, said Alan Sorkin, a SVP founding partner and former vice chairman, who now serves on the board of HDF, San Diego SVP and SVP's international organization.

The organization brings together individuals from the local business community who donate money and expertise to help nonprofit groups. Most SVP partners are local entrepreneurs and executives and can provide pro-bono expertise in fields such as technology, marketing and legal strategies, as well as provide connections to other local execs.

Partners in the organization commit to donating $5,000 each year for three years.

Those funds went toward HDF's Parent's Place program, which provides bilingual evening classes for Open Gate parents who "often feel disconnected from their child's education," Fox said. At the classes, parents learn the same curriculum as their children, as well as study skills such as using a library or researching on a computer.

The program has been successful, Fox said, and with occasional potlucks, has become more like a "family event."

SVP only commits to three years of funding and no longer gives money to the foundation, but SVP partners have joined the HDF board and HDF's Fox represents nonprofits on the SVP board.

"As the program grew and the number of tutors grew, she was falling behind," Sorkin said.

Dean Rosenberg, an SVP partner and the CEO of software developer AIRSIS, volunteered to help.

"I didn't find it particularly fulfilling to just respond to a letter in the mail and write a check," he said.

He and several AIRSIS employees spent the equivalent of two months putting together a Web-based software system that would help Fox keep track of tutoring schedules, allow tutors to note what strategies they used with which students, and determine how effective those strategies have been.

"We realized that with a little bit of technology, we could go a long way," Rosenberg said.

HDF is adding a second class to its Escondido district program this fall, and is working with the Darnall charter school in San Diego to develop a model for implementing Gifted and Talented Education programs at charter schools.

The foundation is currently in the middle of its "Cultivating Brilliance" fundraising campaign, hoping to find 50 businesses or individuals to donate $2,000 -- the cost of putting one child through the program -- for three years.

Local businesses "recognize that we need to grow our own workers," Fox said. "They're very interested in the education of young children."