By TANYA KURLAND, Special to the Daily Transcript
Thursday, August 30, 2007

Acquiring office space or a building can be as crucial for a company as the operation of the business itself.

It can sometimes define the company in the eyes of its customers and affect the attitude of the workers as well.

Brokers at Strom Commercial Real Estate understand this and say they commit themselves to the challenge of always finding "the perfect fit" for their clients.

"We want to make sure that they really love their space because they are the ones that are going to be working out of it. We don't want them to be unhappy if they are there for years," CEO and President Hans Strom said. 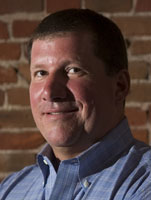 His company's first big project was the purchase, with the help of an investor, of a 10, 000-square-foot building on the corner of Fifth Avenue and Grape Street.

Once the renovations were complete, the design gave the space a hip, urban feel, attracting a line of prospective tenants.

"We had people fighting over the space," Strom recalled.

Finding architecturally distinctive space for small commercial and retail businesses is a practice Strom's company began to develop and refine.

Along with Steve Martini, Strom in 2001 founded his current company downtown, where five other staff members help find office space for clients in downtown proper, East Village, uptown, UTC and other urban neighborhoods.

Strom ventured on his own to have the opportunity to "work with more interesting clients and not be bound to just generate dollars, as you do if you work for a large firm," he said.

Although the development of Petco Park and surrounding blocks led to a substantial real estate boom, it was the conversion of parking lots into commercial space that allowed a downtown San Diego business presence to flourish, Strom said.

"What I thought was going to take 20 years to happen took only six years," he added. "First we had residential, then infrastructure and now the retail is playing catch-up."

Many commercial and retail tenants have renewed their leases to stay in downtown instead of heading for the suburbs, Martini pointed out.

While some of the search for buildings has led to space as large as 30,000 square feet, Strom Commercial works mostly with small, startup or slowly expanding companies looking for room no bigger than a few thousand square feet (most office space downtown is generally no bigger 5,000 square feet).

Clients usually look for a three- to five-year lease; space where they can grow; not pay Class A rents; and a building that offers unique exterior and interior designs or allows for renovations to meet a company's architectural needs.

One client is owner of the historic Spreckels Building at 121 Broadway. Completed in 1912 by John D. Spreckels, the building was named a Historical Landmark on the National Registry in 1975.

Owner Jacquelyn Littlefield has been actively bringing the building back to its former glory, restoring the original tile floors, interior painting and renovating the 10-foot-high ceilings, six-foot tall operable windows and locking vaults. She will also be painting the exterior of the 260,000-square-foot building with a new tone-on-tone grey and white with gold-leaf accents.

The building is home to attorneys and other business professionals as well as restaurants. Many of the offices range from 500 to 3,000 square feet and a short-term lease -- a rarity for downtown San Diego commercial and retail renters -- is offered, Strom said. Most leases tend to be at least five years or more, he added.

The opportunity to create a mixed use of retail and residential is the "wave of the future," Strom said, allowing tenants to live and work in the same space.

The company is currently handling negotiations with Champion Development of Los Angeles and the historic Sandal Fox Building at 624 Broadway, a combined office and condo project.

Another client purchased a building on 11th Avenue, offering tenants a split-level space ranging rom 1,250 to 1,400 square feet. Tenants can use the ground floor level as an office and the loft above as living quarters.

The challenge downtown is the limited vacancies. It typically takes Strom and his associates up to a year to find the perfect space for their clients.

Clients are educated on the process and aware of the time schedule, and do not feel discouraged when they don't see their future company home right away. Many developers that come from outside of San Diego tend to have high expectations, Martini added.

"When moving downtown we tell them they have to be realistic," Strom said. "We also let them know that they have to pay for parking -- many of them forget about that -- they need to be patient. We don't want them to have any surprises."

Staying on top of real estate trends is a top priority for the broker firm. The Cortez Hill area and Barrio Logan are regions that Strom Commercial is currently touting as the next new thing.

"We see a lot of opportunity outside the immediate downtown area that are slowly playing catch-up," Strom said.

For more information on the company and its current listings visit www.stromcommercial.com.