By MOLLY NANCE, Special to the Daily Transcript
Thursday, August 30, 2007

Their grandmothers were sisters, their fathers were both civil engineers, working for Southern California Edison.

So if family history was any indication that Keith Kulberg and Richard Day, owners and founders of Royal Pacific Construction, would end up working together, then its no a surprise that they've been business partners for the last 15 years.

When these two-second cousins formed Royal Pacific Construction in 1992, they aimed to keep family ties strong, and hopefully have a successful business. 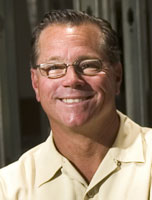 During their first year of operation, the gross revenue for their company was a mere $80,000. The projected income for 2007 is $20 million.

Day and Kulberg attribute the escalating monetary growth to their overall experience and the company's customer service.

"And good fortune," Kulberg said. "We're very blessed to have an outstanding work force here that brings excellence to the table, and our incredible clients that put their trust in us."

Their client base is huddled in San Diego County, but trickles upwards towards Los Angeles and to Redlands, in San Bernardino County where their biggest project, an 80,000-square-foot medical building, stands. They specialize in tenant improvement -- the construction of interior office space environments -- for retail, medical, biotech, industrial and hospitality venues.

Even though their current market "niche" is medical condos, to stay focused on just tenant improvement projects for commercial development, is not part of the business plan, Day said, because when the economy fluctuates, as it is now, market trends shifts.

"That's when diversification is always helpful, when we move into maybe doing some remodels for residential," he said. "Or moving from tenant improvement to new construction, working from the ground, up."

One of the biggest constraints the construction industry is experiencing today is the rise in material cost, which the owners of Royal Pacific Construction are now facing. Kulberg said that construction occurring oversees; in China and India is changing the face of the industry in the United States.

"The cost of construction has gone up, and it's not due to labor, but due to the material costs," he said, adding that material such as concrete, dry wall, copper, fuel, and rebar -- one of the key components in the building's foundation -- has skyrocketed. "Just a year and half ago, rebar was 300 bucks a ton, and now it's up to 1,100 bucks a ton."

Not only is the rise in costs an issue that Kulberg and Day have to be aware of, but they are also keeping a close watch on technology. For example, what used to be done with a phone call and a hand written bid, Day said, is now being replaced with e-mails, document scans and proposals posted on the Web.

And while estimating the costs of the projects used to be a "guessing game" of sorts, it is now industry standard to identify all the costs before the job is done.

"It's getting pretty precise and competitive," Day said.

Royal Pacific Construction started with tenant improvement projects in office spaces in downtown San Diego, but have since moved out and completed projects in business parks in Sorrento Valley, and Torrey Pines. So, competition isn't as widespread as one might think, as development in San Diego grows.

"It's a small industry, you think it has grown, but it's still the same people out there," Kulberg said.

Working with 60 and 100 contractors regularly, ranging from designers, architects and space planners, both Kulberg, who has an industrial engineering degree from San Diego State University and Day, who shares the same alma mater with a degree in marketing, enjoy the creative side of there business.

As Kulberg describes it, the projects go from "napkin to blueprint."

"It starts with a little napkin drawing -- 'this is what I'm thinking of doing' -- and then you get a set of blueprints on your desk," he said.

Day, who also has a background in architecture, said he enjoys the design portion of the work he does for Royal Pacific Construction.

"The whole process is like being a conductor, and you're basically conducting the orchestra. And at the end of the day, we all turn and bow, we all get the credit, we all get the paycheck. You just want to play a good piece of music, so that you can come out and play again," he said, adding that they have played again and again. "Yeah, there's a saying: 'Our last job is our next referral.'"

That's how Royal Pacific Construction has become a family-owned dynasty in San Diego.