Since January of this year, the Grossmont-Cuyamaca Community College District in East County has opened three new buildings on its two campuses, and as of fall 2007 will open two additional buildings.

A $19.7 million, 38,000-square-foot science laboratory building and a $17.6 million, 27,000-square-foot digital arts and sculpture complex were opened earlier this year on the Grossmont College campus, according to Joe Miner, program manager for Gafcon Inc., which is serving as project manager on the district's construction projects.

A new $24.7 million health science building for the Grossmont campus is in the design stages. The two-story, 66,291-gross-square-foot facility will house health professions programs, science labs and classrooms.

By fall of this year, the Cuyamaca campus will introduce two additional new buildings, an $18.9 million student center and a $44 million Communication Arts facility. Both are currently under construction, Miner said. 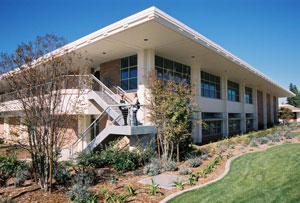 The $19.7 million, 38,000-square-foot science laboratory building was opened earlier this year on campus at Grossmont College.

Cuyamaca also has a business and computer information systems building in the design phase. The $18.5 million facility is slated to be 50,570 gross square feet and include 785 seat and at least 19 labs.