Some of the transportation projects that will impact the East County are actually outside of the area but will provide better access to East County sites.

State Route 52 already goes from La Jolla to Santee, but transportation planners both for Caltrans and the San Diego Association of Governments have long envisioned SR-52 going all the way from the coast to Highway 67 -- a vision that may finally be realized some time in 2010.

Costs of the SR-52 extension are subject to change due to material costs and other factors, but are currently projected at $470 million. Of that figure, $153 million is expected from the Transnet half-cent sales tax. The remainder of the funding will come from federal, state and other local sources. 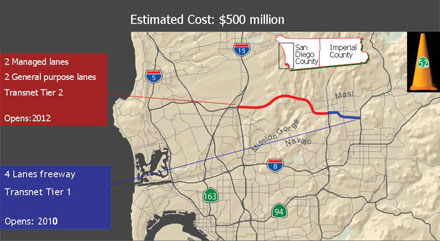 The extension of SR-52 is listed as SANDAG's third highest priority highway project behind the extension of SR-905 eastbound from Interstate 805 to the Otay Mesa Border Crossing and the implementation of high occupancy vehicle lanes along I-805 from SR-52 to I-5.

While not yet high on the priority list, one proposal is to extend SR-125 from SR-52 to Poway Road, providing yet another option to those not wishing to go directly onto Highway 67.

In addition, plans call for widening SR-52 from I-15 to Mast Boulevard in Santee.

Caltrans recently opened the SR-52 Westbound Widening project between the SR-52 Summit and Santo Road in Santee to traffic.

Plans also call for SR-52 to be widened to include high occupancy vehicle lanes between I-15 and SR 125. As of March, the projected cost was $283 million.

Numerous other projects are in the works in the East County, but in most cases, these projects are considered a lower priority than the mega-projects along the I-5 and I-15 corridors.

Under this assessment, projects along the Interstate 8 Corridor, which has no shortage of traffic bottlenecks westbound in the morning and eastbound in the afternoon, have been placed at the back of the line. Still, they do remain on the list.

One of these proposals is to widen I-8 from SR 67 to Los Coches Road in the Lakeside area.

There have long been cries to widen the length of Highway 67. While topography would make it impossible for the road to remain completely straight, long-range projects could make a significant difference were they to be implemented.