One development aiming to solve this lack of industrial space is P3E LLC's Maggio Industrial Center, which sits on 640 acres at the Gateway to the Americas.

Recently the first of six phases in P3E and IPED's plan to develop commercial, retail and industrial space on the acreage was completed, according to Warner Bonner, partner at P3E. IPED is a San Diego-based development company that owns an interest in P3E.

Phase one consisted of grading and constructing/installing the necessary infrastructure (utilities, roads) on the first 80 acres of land, which cost $7 million and was completed by general contractor Hazard Construction. 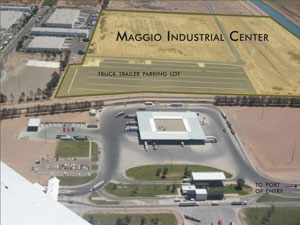 An aerial view shows the location of the 640-acre Maggio Industrial Center, along with the truck trailer parking lot.

Currently P3E, along with CB Richard Ellis, which is marketing the project, is going through the land lot sales program. The project is 70 percent sold through the first phase in terms of pre-commitments, and P3E hopes to sell out by the end of first-quarter 2008.

"This (the 640 acres) has had a black eye because it was held in bankruptcy for so long, but people are starting to believe things are happening out there," Bonner said.

Build-to-suit and parcels are available for sale or lease, giving tenants the options of owning and developing their own facility, owning the facility and having it developed by P3E, or leasing a facility developed by P3E.

According to Bonner, a lot of owner-users are interested in buying the land rather than leasing out a build-to-suit facility, as there is a real pride of ownership for custom brokers, distributors and manufacturers who have leased facilities in the region up until this point.

"We're getting a lot of demand from logistics firms that need to be near the border because they have operations in Mexicali," said Chris Pascale, senior vice president of CB Richard Ellis.

This demand exists despite the industrial vacancy rate increasing for the third consecutive quarter in San Diego County to 7.2 percent, according to CB Richard Ellis' second-quarter market report.

While construction of buildings has not commenced, Bonner said several lots have closed escrow and currently are in the design stage. Construction of facilities on the first 80 acres is anticipated to begin in six months, as the acreage is four months away from a final map.

Facilities developed by P3E will include a 150,000-square-foot speculative building and numerous 10,000-square-foot facilities, which will be for lease. In total the developer is "spec-ing" 250,000 square feet, with Smith Consulting Architects responsible for designing these facilities.

When completed, the first 80 acres could include up to 700,000 square feet of light industrial and distribution space.

In addition to the first-phase grading and infrastructure work, a 16-acre truck-parking terminal has been developed by Pimentel & Sons Inc., which has exercised an option to expand the terminal to 21 acres.

In a future phase, P3E plans to build a retail center in addition to more industrial facilities, as 20 percent of the total 640-acre development is dedicated to retail. Bonner noted that one of the most successful Wal-Mart stores is located near the development site.

Maggio is located in a federally designated Foreign Trade Zone, and Gateway of the Americas has also been approved as a California enterprise zone, which encourages entrepreneurship and employer growth by offering state and local tax credits.

"Gateway to the Americas has become an ideal location for logistics firms, warehouses, light manufacturing and retailers, all of which will contribute to the continuing growth of the Imperial County economy," Bonner said, adding that for every 1,000 square feet of industrial space on the Mexican side of the border, there needs to be 300 square feet of industrial on the U.S. side.