Two new hangars and a ground support building were completed at the Naval Air Facility (NAF) El Centro earlier this summer, while phase two of the project has been put on hold due to contractual issues. The hangars measure 34,200 square feet each, and have replaced hangars built in the 1940s that are being torn down.

The project, begun in the fall of 2005, was completed on June 14, and was in use by the next day. NAF El Centro is a well-known center for naval aviator training, with more than 450 daily flight operations, and a great need for up-to-date hangars. Its unobstructed desert terrain, limited non-military air traffic, and own gunnery and bomb ranges draw almost 1,600 personnel each month to train for aerial combat maneuvering, air-to-air gunnery, bombing and electronic warfare.

"The new hangars are state of the art, and the great thing for us is they're replacing hangars that were built in the 1940s," said Michelle Dee, Navy public affairs officer for NAF El Centro. "We don't have any aircraft permanently assigned out here, so when units come here to train, for them to be able to use brand new hangers really helps them in their training rotation. To be able to have computer access, good briefing spaces, it's just great." 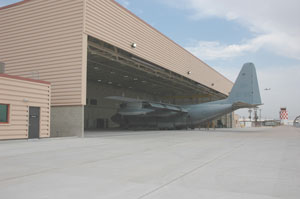 One of the two new 34,200-square-foot hangars completed in June at the Naval Air Facility (NAF) El Centro. New technology allows four jets to pull into the hangar, or support beams can be raised to allow in one large plane, like this C-130. Photo: Michelle Dee, NAF El Centro

The two new modular hangars have new unique systems that make them especially useful for the many planes that come through NAF El Centro.

"You can either have jets in there, or you can reconfigure the hangar entrances so you could have one large aircraft in there," Dee said. "So if you needed to work on a large C-130, you could pull it into the hangar by raising all the support mechanisms. Or you could put the dividers back down and pull in four F-18s."

"And it's all wired now," Dee said. "The old ones didn't originally come with fiber-optics because they were built so long ago, so all the buildings now have computer access, different things we really need to train."

Phase one was built to LEED guidelines, with such features as energy-efficient tankless water-heaters, and electric lights that adjust based on the amount of natural light coming into the building.

"We try to do green construction as much as we can. The requirements are an executive order that we must use in the construction process, although we don't necessarily have to have the LEED certification," said Lt. Cmdr. Isabelle Detter, public works officer for NAF El Centro.

Phase two of the project, which has been put on hold, was originally planned to add two more hangars to the project, each measuring 33,900 square feet, Detter said. Also, while one old hangar has been demolished, phase two was planned to demolish three more. Contractual issues, and possible resulting litigation, have put phase two on hold for an indeterminable amount of time, said Lee Saunders, public affairs officer for NAVFAC Southwest. Saunders declined to further discuss the contractual issues.

When asked if the Navy is satisfied with phase one of the project, however, Dee said, "We're thrilled to have the hangars; they've been quite a benefit for our attachments that come here to train. They're great facilities and they really allow us to train like we fight."