CBRE CEO: Growth by acquisition best, if fit is right and funding there

Large international commercial real estate firms and small boutique brokerages will continue to fare well, but there won't be much room for those in the middle, said Brett White, chief executive officer of CB Richard Ellis (NYSE: CBG), one of the big international firms.

White, at a recent event at the Burnham-Moores Center for Real Estate at the University of San Diego, said Burnham Real Estate Services, which has operated in San Diego for more than a century, is an excellent example of a smaller firm with a big local presence.

White, who hearkens from San Diego and was a sales manager for CB Richard Ellis' (CBRE) downtown office 16 years ago, climbed all the way to the top of a firm that had $4 billion in revenues last year, some 24,000 employees, not even counting those in affiliate and partnership offices, and manages more than 1.6 billion square feet of office/industrial space. 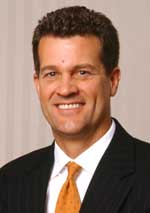 "Mergers and acquisitions are incredibly important, but only work if they are a good fit," White said. "Integrating companies is tricky and delicate stuff. You don't get a lot of bites at the apple, and many times you are taken to the dance almost as a reluctant suitor."

White is convinced that while partnership alliances may be helpful at some levels, larger firms will only thrive if they themselves have a global presence.

"Trammell Crow and Insignia had to have a global platform, and that's what we provided," White said.

White said he expects to continue to acquire new firms as they become available, and suggested the CBRE is in such a strong position because its acquisitions are able to be self-financed.

For commercial investors who must finance their acquisitions in a more traditional manner, White said while there has been some increase in the cost of financing, the changes have been relatively minor.

"The cost of financing and the cost of credit are going up, but the changes aren't severe," White said.

Unlike the relative meltdown in residential real estate where foreclosures have soared, White said foreclosures on the commercial side have been virtually non-existent -- particularly in Southern California.

"The fundamentals between residential and commercial are very different. Rental income in (commercial) buildings is terrific and there is almost no new construction," White said before adding that the decision to buy is less a function of price than of operating income.

On the multifamily side, first there was the condominium conversion craze. Then the conversions stopped cold late last year. Now projects that started as apartments and became condominiums, are becoming apartments again.

With all of this, White still believes in the fundamental health of the apartment sector.

White said the strength of the apartment market here in Southern California and in many other parts of the country is evidenced by the plan by Tishman Speyer to acquire apartment owner/developer Archstone-Smith (NYSE: ASN) for no less than $15.5 billion before taking that company private.

Archstone-Smith owns about a dozen complexes in San Diego County.

"Apartments are a good investment right now as people move out of homes they couldn't afford, and back into apartments," White continued.

With vacancies of 3 percent or less in many if not most markets, retail continues to be a highly prized asset class in Southern California.

This may not be the case in other parts of the country where residents where employment is a problem, however. Still, White believes retail will generally continue to be a strong asset class.

Home prices may have declined here and elsewhere, but White said that hasn't happened in the office sector here where big investors such as The Blackstone Group (NYSE: BX) and The Irvine Co. have bought and traded billions of dollars worth of office real estate.

When asked about the coming year, White said he doesn't foresee any significant price declines anywhere in the commercial sector.

"We're not back in the RTC (Resolution Trust Corp.) days when a property priced at $100 million will suddenly drop to $70 million. That's not going to happen," he added.

White does worry that a perception of a down market could be a self-fulfilling prophecy, but added that the underlying economy should be sufficiently strong, and the Federal Reserve sufficiently vigilant, to keep any downturns to a minimum.

Not everything is as White would like in his old hometown. He believes San Diego's geography could present problems down the line.

"San Diego is an investment market of choice, but it's not on the way to anywhere," White said. "Its port will never be a port of significance in the global sense."