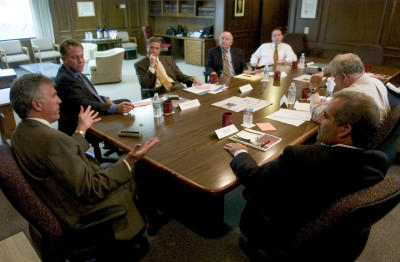 Participants at a recent commercial real estate roundtable concluded that while there may be bumps in the road, there won't be the sinkholes that have plagued the residential sector.

The health of San Diego County's commercial markets and what to expect next year were topics of conversation at a roundtable discussion at The Daily Transcript offices.

Jay Alexander, a Colliers International senior vice president, said while some may worry about what the collapse of the subprime market and the ensuing layoffs may mean, any losses would be rendered insignificant by employment gains in other sectors of the economy.

Alexander noted that one company alone -- Torrey Pines-based General Atomics -- accounted for about 860,000 square feet of additional space (mostly in Poway) for its operations in 2007.

"This dwarfs any losses," Alexander said.

Stath Karras, Burnham Real Estate Services president and CEO, said he is satisfied that a great deal of intellectual capital will fill commercial spaces, and new tenants will range from producers of clean technologies to sporting goods firms.

"When we look at demand side, we look at where employment is occurring. We are still seeing pretty good growth in the life science, software, communications and military-related industries," Karras added.

This is not to say there aren't problems.

Nick Psyllos, a senior vice president of CB Richard Ellis, said there does appear to be a major liquidity problem, but emphasized that perception may be dictating the reality.

"This is more a confidence issue than a lack of capital," Psyllos said.

Richard Caterina of Johnson Capital said "there is lots of liquidity, but it is in cash right now," rather than in some other vehicle.

Caterina added that the fact people are having the liquidity discussion so early in the game means the problem can be dealt with much earlier than it would have been in the past.

Psyllos added that some $35 billion to $40 billion worth of commercial mortgage backed securities (CMBS) funds are bottled up in the system, and he looks forward to the day when those funds are freed.

"When that pushes through, things will go back to normal," he said.

Alexander said many buyers who had originally intended to turn over their assets for a quick profit are finding they can't turn the property around swiftly. This means someone must be hired to manage the asset, and that can be expensive.

"Now they're going to have to focus on bricks and mortar," Psyllos added, saying it will also be more difficult to squeeze out profits at least for a while.

Psyllos expects the top Class A office projects will continue to fare well, but the Class B and even B+ properties could have a much more difficult time.

Alexander said while the Class A market isn't faring poorly, it's not quite as strong, either.

"It's a 3 percent annual yield instead of a 7 percent yield," Alexander said.

John Ferber of the University of San Diego's Burnham-Moores Center for Real Estate said a 3 percent annual yield is a much more sustainable growth anyway.

"We are getting back to normal," Ferber said.

Perception or reality or both, tenants seem to be in the drivers' seat today, and they realize it -- pushing the envelope of their deals. Alexander said this is all part of the cycle.

"In some markets there will be more building than absorption, then the market will return to equilibrium before they overbuild again," he said.

Alexander, noting Colliers' calculations, said about 46 percent of the 2.4 million square feet was pre-leased as of the end of June. Put simply, he believes it will be absorbed.

He scoffed at those who say land for new commercial development is running out. While it may not be getting any cheaper, it is available, he noted.

When asked if the amount of office sublease space could present a problem, the participants said it really isn't an issue.

"You have to ask how much of that sublease space is leasable," Karras said.

Psyllos said he didn't believe sublease space is acting as a drag on the economy. Scott Biel, a member of the law firm of Mintz Levin Cohn Ferris Glovsky and Popeo, said subleased spaces provide an excellent opportunity for startup companies.

Save for Otay Mesa, where new warehouse space continues to be built, Alexander said it may be too costly to build industrial projects in other parts of the county.

"Look at any multitenant industrial park in Kearny Mesa. That's gold," Psyllos said, adding that those who wanted warehouse space in the North County are now tending to head to the Inland Empire.

"Everybody has been able to push rents real high," Alexander said.