By JAN PERCIVAL, Special to the Daily Transcript
Thursday, September 27, 2007

With construction nearing completion on the final phase of the $54 million Marketplace at Liberty Station, developer C.W. Clark Inc., has inked lease deals for more than 65 percent of the 160,000 square feet of retail and commercial space at the Point Loma mixed-use center.

The first shops and restaurants, including a Trader Joe's grocery store and Starbucks coffee shop, opened earlier this year at Truxtun and Womble Roads near Rosecrans Street within the central portion of the 351-acre former Naval Training Center, which has been undergoing a decade-long renovation. The city of San Diego and The Corky McMillin Cos. are partners in the $850 million redevelopment of the 75-year-old former military base that includes a blend of residential, retail, business, recreational, artistic, cultural and educational elements. 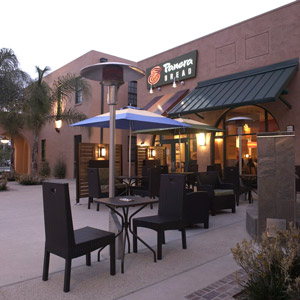 The fully restored historic space at The Marketplace at Liberty Station already is home to a handful of tenants, including Panera Bread.

Expected to open by year's end is a new and unique Vons grocery store that will take up 45,000 square feet on the ground floor of a pair of former barrack buildings connected by a spacious courtyard. Retrofit work on these buildings will continue in the next few months with the spacious and urbane Vons store expected to celebrate its grand opening at the new site as the holiday season gets under way.

"San Diego's retail market continues to be very active with vacancy rates among the nation's lowest," said C.W. Clark's Jeff Rogers, the project's development manager. "And the strong interest and leasing activity at the Marketplace indicates there's no sign of this retail trend slowing down in urban infill locations such as Point Loma."

The project has achieved good absorption in part due to its highly visible and prime location in what continues to be a desirable central San Diego retail market.

"It meets the growing retail needs of the area's residents and workers, as well as the commercial office needs of businesses that want to relocate or expand within the prestigious Point Loma area," Rogers said.

Second-floor office space also is being offered for lease in the buildings, with recently signed agreements announced with Shelby Dental Professional Corp. and It's All About the Girl for 8,700 square feet of space. Additional leases are in negotiation.

The Marketplace's historic and scenic setting -- with its interior courtyards, fountains, arched arcades and open promenades -- also makes it an exciting and architecturally distinct place to visit, shop, relax and even work.

"There's no place like it anywhere in the San Diego County," said Craig Clark, president and CEO of the development company.

According to Clark, a team of experts has made heroic efforts to preserve and renovate existing historic buildings on the site to create one of Liberty Station's most "visually stunning landmarks and authentic community touchstones."

"The Spanish Revival-style buildings here are being lovingly restored to preserve the magnificent work and retain a vital piece of San Diego's military history, all the while providing today's civilians with much-needed retail and business services," Clark said. The company also refurbished the historic North Chapel directly adjacent to the retail center, to the tune of $1.35 million. The North Chapel now is available to community members for weddings, spiritual celebrations and other special events.

For the past five years at Liberty Station, C.W. Clark has worked closely with Heritage Architecture & Planning, Nadel Architects Inc. and general contractor Legacy Building Services to restore, retrofit and rebuild the chapel and other dilapidated buildings that have sat vacant and abandoned since the Navy closed the base in 1997.

Though sparkling new, the Marketplace at Liberty Station is in many ways like an old-fashioned town plaza with its tree-lined sidewalks and colorful storefronts, featuring several open-air courtyards for informal gathering and special community celebrations. All of the shops and businesses are connected by covered arcade walkways, with ample parking spaces in a large lot in front of the stores.