By JENNIFER WHITELAW, Special to the Daily Transcript
Thursday, September 27, 2007

The Santee Town Center redevelopment area is jumping with commercial development activity, and the city of Santee could soon become a major commercial market player in the County of San Diego.

City officials' concerted efforts to attract major employers and retailers to the area, along with the cooperation of visionary developers, have resulted in 1.14 million square feet of recently developed retail and office space, with another 1.9 million square feet of corporate campus space planned on 104 acres at RiverView Santee alone.

"We're already starting to see a major shift in the commute patterns, thanks to companies such as Hartford that have created hundreds of new jobs," said Santee Mayor Randy Voepel. "We're keeping more cars off the road, reducing driving times and offering a reverse commute." 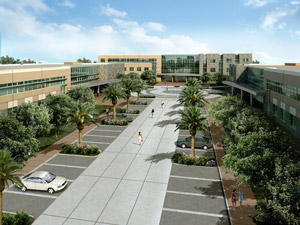 The Ryan Cos. will deliver 63,500 square feet of Class A office space at RiverView Professional Center in Santee.

Walgreens will build two new stores this fall along Mission Gorge Road, one near Magnolia Avenue and one near Carlton Hills Boulevard, with both openings slated for early next year. Other new commercial developments include a Best Buy, Navy Federal Credit Union and a Navy Medical Center.

"We're really excited about all the new retail development," said Keith Till, Santee City Manager. "Not only does it give our residents more shopping choices locally, it also brings jobs to our city and helps attract office development and employment as well."

The Ryan Cos., having already delivered a new office building for Hartford Financial Services, is currently constructing its second of five phases of RiverView. Phase two, RiverView Professional Center, offers 63,500 square feet of Class A office space divided among six one- and two-story buildings.

RiverView MD Spas already signed on as a tenant at RiverView Professional Center, with another major user soon to be announced.

In addition to the 485 new jobs Hartford Financial Services brought to Santee, city officials hope to add an additional 4,000 to 5,000 employees thanks to RiverView Professional Center.

"Anyone who hasn't had the opportunity to visit Santee lately would be surprised to see how much it's changed," said Warren Savage Jr., executive director of the Santee Chamber of Commerce. "Now that companies can find Class A office space and expanded retail amenities, we're getting a lot of interest from firms in East County and central San Diego who see an opportunity to locate closer to their employee base and to public transportation without compromising image or convenience."

Santee workers and residents can take advantage of the San Diego Trolley, which stops at Trolley Square and connects to central and south San Diego County. The city also connects to the rest of the region through state Routes 52, 67 and 125. Between January 2008 and late 2010, Caltrans crews will work to connect SR 52 from SR 125 to SR 67, further improving circulation.

"Another attractive feature for business owners is our close proximity to Gillespie Field Airport," said Till, referring to the largest of the county's airports, which offers charter jet services and three runways.

Till says Santee is working hard to put in place the infrastructure to support the boom in commercial and residential construction it expects. With approximately half of its land undeveloped, Santee is one of the few cities in the county with space to grow.

As part of that effort, city officials will turn significant amounts of land into permanent open space and recreational facilities to support their growing resident and worker populations.

In 2003, Santee activated additional open space when it completed phase one of the 55-acre Town Center Community Park, which includes a 35,270-square-foot Aquatics Center and YMCA facility. The city will start construction on the last phase this fall, with completion expected in fall 2008.

The second phase includes a sports complex with a restaurant, batting cages and sport fields for softball, baseball and arena soccer, as well as an entertainment venue, grass and artificial turf soccer and football fields, covered picnic areas, playgrounds and multiuse trails.

Whitelaw is a senior consultant with TW2 Marketing Inc.