Gabriella Campos wasn't thinking much about college when she was in seventh grade -- she had years before she would have to take the SAT or fill out applications.

But already, her district was sending home information about the grades she'd have to get and the classes she'd need to take to get into college. Campos said those "roadmaps for college" helped her prepare for higher education, and ultimately got her into San Diego State University, where she is now a sophomore studying accounting.

Campos' high school district, the Sweetwater Union High School District in South County, formed a partnership with SDSU in 1998. The high schools would prepare their students for college, making sure they took the necessary courses, maintained a 3.0 grade point average, and took the SAT. SDSU, in turn, would guarantee acceptance for students who fulfilled those requirements. 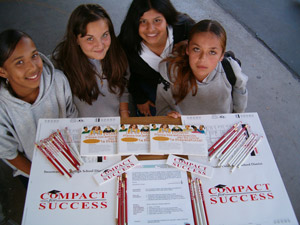 Seventh-grade students from the Sweetwater Union High School District are automatically part of the Compact for Success program, a partnership with SDSU that helps students prepare for college.

The first "Compact for Success" class is now in its sophomore year at SDSU. When that first group entered college, 650 Sweetwater students enrolled at SDSU, a 78 percent increase from 364 students the year before.

To help those students financially, a third element of the partnership -- the Sweetwater Education Foundation -- was created to provide scholarships for Compact students.

"It's one thing to prepare them and get them into college, but if you can't support them and if they don't have the resources and the means to get through," the program won't work, said Eduardo Valerio, president and executive director of the foundation.

The Sweetwater district serves 39,000 students in communities including Chula Vista, San Ysidro, Bonita and Otay Mesa. Sweetwater seventh graders are automatically part of the Compact, and stay in it through high school if they maintain their grades and meet other academic benchmarks. In addition to receiving college admissions guidelines, Compact students visit and take tours of SDSU in seventh and 10th grades.

They don't have to go to SDSU, but if they do, Compact students continue to be involved in the program. Besides scholarship opportunities, they also fulfill some general education requirements by taking Compact classes together as freshmen.

"(Other students) were just so overwhelmed," Campos said. "For all of us who were in the program, we were really lucky."

The foundation gives scholarships of $500 to $2,500 per student for each year. Students receiving scholarships must demonstrate they qualify for financial aid by filling out standard forms such as the Free Application for Federal Student Aid (FAFSA).

With about half of the Compact students at SDSU receiving scholarships, the foundation must raise about $450,000 to $500,000 per class, Valerio said. Since the foundation was formed in 2003, it has raised about $2.7 million.

About half of that comes from private donations from individuals or corporations. The foundation held a Scholarship Gala on Sept. 13 to honor its donors, including Carol Stensrud of the Stensrud Foundation, who is individually sponsoring more than 100 students.

Local businesses have also helped, financially and by donating their time or resources, Valerio said. Cox Communications, for example, has agreed to run public service announcements about the initiative. Valerio said Compact organizers are also working with local companies and public entities to arrange an internship program for Compact students.

Raising funds for such a specific geographic region is difficult, Valerio said.

"There aren't a lot of big corporations in South County," he said. "We have to go everywhere."

Despite the difficulty in finding funds, they hope the program will continue to expand. San Marcos and Escondido school districts have been adopting similar initiatives, Valerio said, and a group of about 100 people from an Austin, Texas, Chamber of Commerce will visit San Diego in October and attend a presentation about Compact.

"It's getting a lot of attention," Valerio said.

Compact organizers approached the state Legislature recently, looking for funds to replicate the program in other districts around the state, but were unsuccessful in getting their program included in the final budget.

Campos went to Sacramento to tell lawmakers how helpful the program was for her. Neither of her parents went to college, and while she had sisters who had gone to college, they were much older than her.

"I was kind of on my own, so I was really glad to have these benchmarks for getting into college," Campos said.

She has continued her involvement with Compact, and is involved in planning a student group at SDSU for Compact students. The group would assist with the programs at their old high schools, helping with campus visits and other activities.

"We want to center around giving back to our high schools and providing any support they need," Campos said.