Five years later, under the leadership of President and CEO Sam Brown, Knight & Carver has undergone a major transformation.

It has essentially quit building boats and become a major player in the international business of retrofitting and repairing them, often times completing work on luxury megayachts that can be more than 300 feet in length. Knight & Carver has also developed a profitable niche in the fast growing renewable energy market for the repair and production of wind blades used on turbines for energy generation. 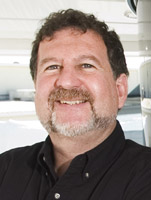 For Brown, who came on board as CEO in 2002 after working with the company as outside legal counsel, the decision to ditch Knight & Carver's traditional business was an obvious one.

"The company was losing money ... building yachts," said Brown. "If you're not making money as a business, what exactly are you doing?"

On a recent weekday the company's boatyard, which occupies approximately seven acres on the National City bay front, was abuzz with projects on a number of yachts, some so large they can't be hauled out of the water.

Brown said the retrofit business is so busy that the company currently has a waiting list for customers seeking work on their boats. As the popularity of megayachts explodes around the globe, Knight & Carver has grown into a destination for the luxury yacht set seeking to re-outfit, or upgrade, their stately vessels.

In the past few years, the firm has worked on Microsoft (Nasdaq: MSFT) co-founder Paul Allen's 301-foot yacht as well as the 192-foot yacht of Oracle Corp. (Nasdaq: ORCL) co-founder Larry Ellison, the fourth and fifth richest people in the United States, respectively, according to Forbes magazine's recent rankings.

Partly in response to growing demand, Knight & Carver has proposed and received preliminary support from National City to develop additional waterfront facilities that would house marine-related businesses. Knight & Carver is in discussions with three developers and envisions approximately 200,000 square feet of retail and office space that would be devoted toward businesses like yacht brokerages, management agencies and designers, according to Brown. It also aims to double the capacity of the company's retrofit and repair business.

Such a development would "put San Diego more on the (yachting) map," Brown said, along with another plan Knight & Carver spearheaded earlier in the year to establish more moorings specifically for megayachts in San Diego bay.

While Knight & Carver's marine business is expanding, its greatest growth is being realized through its wind blade division. What started with a call from a wind energy field operator in 1997 asking if the ship building company could help repair a single wind blade, has blossomed into a major source of revenue for the company.

Because of similar materials and expertise used in the marine industry, Knight & Carver decided to give the wind blade a shot. When Brown came along in 2002, he said he saw "good margins" in wind blade repair and growth opportunity for the company.

In March the wind division opened a production facility in South Dakota, where it builds and repairs blades.

In 2007, Brown anticipates revenues between $18 million and $20 million for Knight & Carver. About 40 percent of the revenues will be generated by the wind business and 60 percent by the marine business.

However, by the end of 2008 Brown predicts the company's wind business will overtake its shipyard business, because of growth within that industry.

With oil prices in the $80-per-barrel range and demand for sources of renewable energy at an all-time high, wind energy products and services have boomed.

Investment in wind energy generation has reached $4.5 billion so far in 2007, according to Christine Real de Azua, spokeswoman for the American Wind Energy Association. Over the past three years the industry has grown at about 25 percent, she said.

"(Wind) is one of the fastest growing sources of new electricity generation in the country," she said.

Brown said Knight & Carver's wind business is directly related to the growth within the industry.