The San Diego Bay is an entertainment destination for San Diegans and about 18 million tourists each year. According to the Unified Port of San Diego's State of the Bay report, locals and visitors also share the bay with 59 species of fish, seven endangered species and hundreds of thousands of birds that visit during their annual migration.

Besides the natural beauty that attracts visitors and residents to the bay, San Diego is also becoming a major yachting destination. Recently, the port announced a two-year pilot program that will temporarily add up to eight moorings to attract megayacht owners. To accommodate the incoming yacht owners, local shipyards are expanding their facilities and offering tailored services to refit and repair vessels.

Shipyard practices include surface preparation, painting, pressure washing, engine repairs, welding and metal cutting -- all of which can create toxic pollution that flows into the bay. As a result, bay waters can become unsafe for animal or human use, including the locals, tourists and workers frequenting the area. One National Oceanic and Atmospheric Administration report concluded that San Diego Bay is the second most polluted bay in the nation. 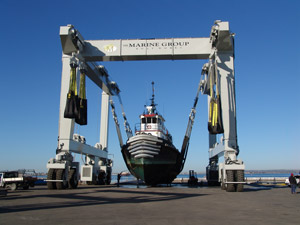 The Marine Group Boat Works' Marine Travelift moves up to 665 tons, raising boats completely above and away from the water, so products used in the maintenance and repair of vessels do not contaminate the bay.

With more boats in need of maintenance and repair docking along the San Diego coastline, local community members and businesses are taking greater initiatives in pollution prevention and environmental stewardships.

Shipyards can utilize Best Management Practices to prevent pollution during routine activities. For surface preparation and paint removal, shipyards can cover all drainage channels and prohibit uncontained blasting or sanding over open water. One common way to curb runoff from reaching storm sewers and into the bay is to contain the area of the vessel that is being worked on through enclosures and coverings, as applicable.

Employee training can also help prevent bay contamination, such as shipyard owners and managers that offer demonstrations of proper painting and spraying techniques to maintain as little overspray as possible. Proper inspections of all materials and areas of the boatyard should also occur regularly, as well as consistent cleanup routines.

One shipyard that recently expanded to meet the needs of the growing yacht community visiting San Diego is The Marine Group Boat Works in Chula Vista. The $6.5 million expansion included implementing more environmentally sound ways to service vessels. The Marine Group's Marine Travelift moves up to 665 tons, raising boats completely above and away from the water, so products used in the maintenance and repair of the vessels do not contaminate the bay.

For sanding and grinding work, The Marine Group scaffolds and shrink-wraps all vessels to prevent paint and debris from entering the air or water. Such scraping and sanding, if not properly contained, can reduce amounts of oxygen in affected waters, bury habitat, food and/or organism and lower water quality. The increased turbidity can also clog the gills of fish.

Such urban runoff is considered by the San Diego Coast Keeper to be the "single greatest source of pollution to California's coastal waters." Untreated water frequently spills into the bay from industrial, commercial and personal sources.

From 1996 to 2001, the city of San Diego averaged almost a sewage spill per day, totaling 45 million gallons of raw, untreated sewage within the bay. These pollutants can have harmful effects on recreational activities, drinking water supplies, fisheries and wildlife.

To safeguard against hazardous runoff, The Marine Group's storm water pollution prevention plan also includes a built-in curb around the shipyard, so all water is caught and collected in 60,000-gallon storage tanks. After treatment, the water is discharged by permit into the sewer system.

Currently, the port recommends that any maintenance including 25 percent or more of a vessel should be done at a boatyard to keep the bay clean. The contamination of San Diego Bay is a concern that has led and continues to lead to numerous initiatives to prevent further pollution. As San Diego grows, pollution remains a major concern that requires changes and improvements from all fronts within the community.