By JILL BLACKFORD, Special to the Daily Transcript
Tuesday, October 2, 2007

D. Jean Moore, CLTC, CSA, has no plans for retirement; she's too involved in her mission: Making sure that her clients do.

Moore considers herself a consultant for one of the most pressing issues baby boomers face as they age: paying for care after retirement. The solution she leads clients to is not yet a household phrase -- long-term-care insurance -- but one she believes should be.

While health insurance is at the forefront of discussion and consideration for most Americans, uninsured or not, long-term health care isn't. Moore is attempting to change that. Her company, Lodestar Insurance Services, was named for its meaning, literally "a star that leads the way, a guide." Moore's mission is to guide her clients to the solution of long-term-care insurance to take care of paying for long-term caregiving needs. 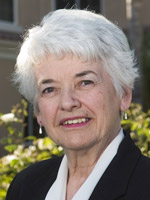 She calls herself both an adviser on long-term-care insurance and a life settlement educator. While Moore works through a broker general agency called LifeStyle Insurance Services Inc., she is fully independent of that organization as well as insurance companies themselves.

Moore has been a member of the San Diego community for nearly two decades, and received a nudge from those at the financial services firm at which she once worked to pursue what she now calls "her niche." It wasn't long after that decision that she experienced for herself the challenge of unexpected health problems, and the corresponding need for expensive medical care.

"My husband had a simple surgery that resulted in many complications -- and I learned first-hand how absolutely exhausting it is," Moore said. "He was near death three times during that year, so I began to speak and teach with much authority and much more passion than I previously had by being placed in the role of caregiver."

Passionate certainly describes Moore. She has a poignant, and perhaps poetic, mantra on the need her business strives to fill.

"The long summer of presumed invincibility too often fades into the autumn of debility, followed by the winter of frailty and disability. In short, the longer we live, the more likely we are to need long-term care," she said.

The numbers certainly support this, as advances in medicine in conjunction with aging baby boomers has made the over-80 segment of the population the fastest growing; the number of people over the age of 65 is projected to double by the year 2050.

For some of these growing numbers of Americans, long-term-care insurance may be an ideal solution to paying for the long-term care that often comes with the increased longevity they may now face.

"Like the call I got from a professor at UCSD who called me to say thank you," Moore said. "She said that she only had two more years to go to pay off her plan and one more year to retirement, and she learned from me that she could pay it off in 10 years."

Moore advises her clients to look into long-term-care insurance as early as age 40 (although she's had someone purchase for a younger spouse aged 31). According to Consumer Reports, however, this may mean paying for several decades of coverage before you know if you even need it, so it's important to weigh options carefully. On the other hand, the publication does report that there may be a fairly small window for obtaining coverage, as a quarter of applicants over age 65 don't meet the health requirements to qualify for long-term-care insurance, and by 75, that increases to one in three.

When asked why Americans are late to embrace -- or even consider -- long-term-care insurance, Moore mentions a lack of education.

"There is an expectation among older people that Medicare will pay for it. It's been an uphill battle to help people realize that that isn't the case," she said. "Others have been lulled into believing they can just transfer their assets to someone else so that Medi-Cal will pay for it. With the deficit landscape, that has changed, and there aren't as many people trying to encourage people to qualify for welfare."

Moore does find, however, that the wealthier the individual, the more likely he or she is to be receptive to the idea of long-term care, which she calls "protecting assets for pennies on the dollar."

Although she works primarily with individual clients often found via referrals from financial planners, attorneys, CPAs and other clients, Moore sees the biggest growth area as the employer sector. There are tax benefits and options like executive carve-out that can make long-term-care insurance an attractive option for employers as well as employees. Moore also talks about the potential to sell unused portions of long-term-care insurance policies to a third party, such as institutions like Bear Stearns (NYSE: BSC) and Berkshire Hathaway, which are called life settlements.

A long-term-care insurance enthusiast, Moore speaks around the community to educate on the value of thinking about long-term care and the risk of not taking the time to evaluate how to pay for it.

"A study done by LIMRA estimates that there are 44 million people not saving for retirement. It's staggering. They will not only lack financial resources needed for retirement; if a need for care develops, how will they pay for it? It's not there unless they have long-term-care insurance," Moore said. "If you lose your home in a fire, it's replaced. The likelihood of that is low, but many, many people unfortunately experience the loss of all their retirement money."

Indeed, long-term-care insurance can be a good way to protect your financial assets, and that is one aspect of her job that Moore seems most passionate about. The other is a bit more intangible.

"It's the feedback from my clients and the knowledge that I'm not only saving people from financial catastrophe -- I'm saving family relationships," Moore said, referring to the strain that caring for ailing loved ones can put on the rest of the family.

Moore has seen a change in long-term-care insurance coverage to be much more comprehensive than it was in the 1990s. She believes coverage will continue to expand, especially in light of the changes in the types of care available.

"Mini-cameras can be used that can be monitored by a remote caregiver, maybe an employed child. Personal GPS systems will be available for Alzheimer's victims who tend to wander. Robotics are going to take the place of some of the demands made on caregivers," Moore said. "But the need for care is not going to go away. The delivery of care will change, I am sure, but the need for being able to pay for it will always be with us."