By TANYA KURLAND , Special to the Daily Transcript
Tuesday, October 2, 2007

When a construction company finds itself at odds with an insurance company over the coverage of a piece of faulty equipment, injury to an employee or a project gone awry, Mitchell Lathrop and his associates at Duane Morris LLP are called upon to help mediate the heated debates.

The firm provides a range of insurance legal services from coverage opinion involving a single policy to litigation on complex insurance projects with billion-dollar exposures.

"It is insurance for insurance companies," Lathrop said.

There are also smaller reinsurance companies that make a niche for themselves creating a market for more creative policies, such as coverage of legs for a model.

"There is a market for any kind of reinsurance, it's just a matter of agreeing on what the policy is going to cost," Lathrop said.

For construction, insurance policies are pretty standard -- a firm can purchase a policy that just covers the project itself, or everything before, during and after the project. The most common types of policies are general liability, project-specific liability, property damage, course of construction, workers' compensation and business interruption. Large, publicly held commercial builders also have directors' and officers' insurance policies.

Other "specialty risk" policies are available including surety and fidelity, aviation, marine and energy, environmental, toxic tort and protection for fires, explosions, building collapses, natural disasters and other catastrophic causes.

The premium can vary. It's hard to put it in monetary terms, as each client differs on what is deemed important to cover, Lathrop said.

Before receiving the insurance, construction companies must meet several prerequisites, including engineering and environmental studies, usually done by a team of engineers and experts hired by the insurance company. The investigation process can take months.

"If I'm the insurance company I will ask dozens of questions to decide what insurance policy is right for the project," Lathrop said.

Following the completion of the study, the two parties then discuss the various policies available.

"You can have anything covered from the first spade hitting the soil or years out after the project is completed," Lathrop explained.

In the past most disputes have gone to court for long, drawn-out battles, Lathrop said. In recent years, especially at the international level, the idea of going to court has steadily declined, with the parties agreeing to arbitration.

"It's quicker and cheaper and people don't want to have to deal with foreign jurisdiction," Lathrop added.

The Conflict Prevention and Resolution (CPR) Institute and American Arbitration Association are two notable organizations Lathrop has worked with on several occasions.

The graduate of the University of Southern California and U.S. Naval Academy has been with Duane Morris since 2003, having spent 30 years in the industry for firms in New York and California.

"I really enjoy and love what I do. It is a real intellectual challenge," Lathrop said. 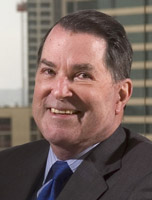