By PADMA NAGAPPAN, Special to the Daily Transcript
Thursday, March 25, 2010

Brian Hays joined Vari-Ro in the fall of 2008, after looking at several companies. The Lakeside company developed an innovative reverse osmosis technology for seawater and brackish water. Hays was attracted by the entrepreneurial opportunity and the chance to make a difference -- a large part of the world has inadequate access to clean, fresh drinking water. He is now part-owner and chief executive officer.

Vari-Ro currently has eight employees and was founded seven years ago by Willard Childs, who invented the integrated pump and energy recovery (IPER) system. IPER is a brand new pumping concept that uses hydraulic pumps, which can reduce the energy consumed during desalination of seawater by 10 percent to 30 percent.

The IPER system’s hydraulic pumps work at lower pressure, so it does not require expensive pumping. Another benefit is that it can be adapted for small, medium or large-scale plants.

The most expensive component of desalination is energy, and typical reverse osmosis technologies are very energy intensive, explained Hays. Vari-Ro’s technology therefore delivers cost and energy savings, although the unit currently costs about the same as the industry standard. 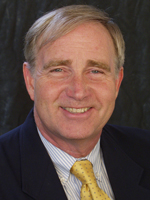 Vari-Ro is currently focused on completing its first production scale plant, intended for the city of Avalon in Catalina Island. Southern California Edison is responsible for all the utilities on Catalina including water, and will operate the plant.

While the city has an existing desalination plant, Vari-Ro has been commissioned to replace it with a more efficient system. The Catalina unit will have the capacity to produce 250, 000 gallons of fresh water per day.

The plant is partially funded by the California Department of Water Resources, through Proposition 50, which set aside $50 million for desalination projects.

Vari-Ro proposed a $3 million budget for the project, of which $1 million was to be funded by the state of California and the rest was to be raised from internal funding and its partners.

“Due to budget issues, the state reneged, coming through with only $200,000. So we borrowed it from local investors,” Hays said. “The state delayed the funding, which also delayed the project. And they stopped funding for water projects in the same month that the governor declared a water crisis.”

Obstacles notwithstanding, Vari-Ro will be ready to ship the unit at the end of April and it will be operational soon after, depending on Edison’s discretion.

A Chicago native, Hays attended Princeton and then obtained a law degree from the University of Michigan before enrolling in the Marine Corps, at the tail end of the Vietnam War.

He moved to Camp Pendleton in 1973, and San Diego became his home port during his four-year stint as a Marine. He stayed on in the city, launched his career as a business litigation attorney with a local firm and was eventually bitten by the entrepreneurial bug.

The first business he founded was a full-service contact center and fulfillment company that serviced direct and catalog sales for large high-tech companies. He raised $3 million in the mid-‘80s to finance this business.

During the next decade, he raised capital, launched and sold several companies before SAIC (NYSE: SAI) came calling in 1997 and recruited him to simultaneously run its call center marketing group, collaboration solutions division and the technology and applications group.

“SAIC was and still is the most entrepreneurial company,” Hays said of making the switch from CEO to salaried professional. “It had an immense amount of intellectual property that it had not capitalized back then. My expertise is in commercializing technologies and starting new businesses. So I focused on developing their proprietary technologies.”

Ten years ago, Hays said, SAIC was a much more freewheeling company. The unit he worked in back then focused simultaneously on growing algae for renewable energy as well as ballistic missiles for the Navy.

The company sent him to Reston, Va., and he was instrumental in securing $45 million in funding from DARPA, the Department of Education, the U.S. Army and the Navy to develop applications for national defense needs.

In 2004 he took over as the CEO of SiteScape, a struggling collaboration software business. Hays went after many of its customers who had not paid fair licensing dues and sued them, bringing in additional revenues. He also pushed for the software to become more user-friendly and intuitive.

He turned the company around and brought in several major new clients including the Center for Disease Control and the National Institute of Health. Novell Software acquired SiteScape in 2008.

Investing to make a difference

When SiteScape was sold, Hays moved on, this time co-founding a food business based in Les Cayes, Haiti, along with two Boston-based Haitian-Americans.

Bel Soley, the business they began in 2008, buys mangoes, papayas and cherry and makes dried fruit and fruit juices. A popular hot sauce is its primary product.

Hays, who is still involved in the company, began volunteering in Haiti through his church. He found that the one thing people there needed most was jobs.

“Our focus was to set up away from Port-au-Prince, which was overcrowded. Les Cayes is in southern Haiti. I am the money guy; I secured the funding and my partners are the operations people who speak French and Creole,” he said.

Hays netted a tidy profit when SiteScape sold, and he was looking to invest in projects that did good, which is why he chose Bel Soley and Vari-Ro.

Interest in Vari-Ro’s technology and requests for units have started coming in from far and near, including hotels in Egypt, the Caribbean islands, construction companies in the Middle East, and agricultural operations and municipalities in Mexico.

In the future, Vari-Ro will also focus on solar desalination, which Hays referred to as the unquestionable gold ring. By this fall, the company will have developed its own technology.

He pointed out that areas that need water are hot and dry and have plenty of sunshine, so an efficient solar desalination technology will solve the water problem in those areas.

Hays named imagination and creativity as the top strategies for his success with various businesses.

“This is key to compete with the larger, better capitalized companies,” he said.

Two other factors he pointed out: tenacity in the face of doubt and the quality of employees.