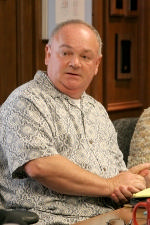 Last week, millions in San Diego County found themselves without electricity in the wake of a multi-state blackout. But not everyone was without power.

With the help of sustainable onsite power generation, it was possible to survive the blackout and generally not be affected, said several executives at a Daily Transcript roundtable Tuesday hosted by K&L Gates. The problem, they said, is that not everyone has moved beyond the skepticism of sustainable building. And those who have are not always aware that making their homes or businesses self-sufficient is easier than it has been in the past, the executives said.

"It is an increasingly complex marketplace," said Irene Stillings, executive director of the California Center for Sustainable Energy. "There is an increasing number of competitors. Consumers are confused ... Our job is to help people make good decisions."

One home in particular, she added, was a shining example of how building sustainably can come in handy during desperate situations. The home she referenced was powered by a fuel cell on its property. The homeowners, she said, had power throughout the night last Thursday.

"The question is, 'Is our distribution grid, or the way we receive energy, going to continue to be on a large grid application?'" Strand said.

On the heavy industry side, building to take the entire commercial sector off grid proves a challenge given the amount of energy needed, he added. But in residential and retail applications, he said it's quite feasible with today's available technology. Transfer switches, which can direct where a home's generated power goes, are the key, he said. Instead of feeding unused power to the grid, where it would just die in the case of a blackout, power generating systems can be switched to solely power the home.

But CleanTECH San Diego Chairman Jim Waring noted that despite San Diego holding the top ranking nationwide in solar installations per capita, very few of the systems are engineered to absorb back the power in that manner.

Steve Johnston, who chairs the San Diego Renewable Energy Society, said none of his group's members who invested in rooftop solar reported making it through the blackout unaffected. The reason goes back to Waring's point, he said, that most systems deployed today haven't used all the available technology.

"When people are getting it for their house, they're generally trying to find the lowest cost solution to help offset their electricity bill," Johnston said. Preparing for an all-out loss of power wasn't a part of the homeowner's initial thought process.

But thinking in those terms isn't as expensive as one might think, Strand said. Battery backups are another way to stay powered through a blackout, he said, with the investment amount varying depending on the lifestyle of the building occupants, the home's size and its location.

IES has built battery-backed systems that Strand said he is sure provided power through the blackout. But one drawback to popularizing those systems is the recurring need for battery replacement, which is required around every seven years.

Despite the room for more growth, things have come a long way since the birth of companies like IES, Strand said.

In the early days of the company, IES was happy with contracts for refrigeration systems and some simple lighting. When the grid-tied revolution hit, things changed dramatically for the company. Formerly viewed as a specialty subcontractor, IES and other similar design-build solar companies now stand as prime contractors on many jobsites today.

"What that did is it brought guys like us into thinking we had to be true construction firms, not just engineering," Strand said.

Just as the mindset had to change at IES, so does the mindset across the nation of the need for renewable building, the executives all agreed.

Complicating matters for advocates like Stillings, who is so dedicated to the cause of sustainability that she refuses to use potable water to clean her vehicle, is the potential wave of new energy policy that could come with the general election next year. There's a longstanding skepticism among some politicians that focusing investment on renewable energy is the best way forward in an economy that's still struggling to recover and is mainly fueled by traditional energy.

But to deny that renewable energy is the way of the future, Stillings said, is to deny the country of opportunity.

"It's like this huge wave that's about to sweep over the country ... It will initially be disruptive but it offers huge opportunities to the business community," Stillings said.

Similar to the initial reluctance from some to pursue renewable energy, there has been some political pushback on building infrastructure to recycle water as well, said Francesco Dorigo, president and founder of Advanced Greywater Recycling Systems. In a generally desert environment, he said a focus on building and retrofitting to make greywater usable, as well as jumping on other renewable technologies, is necessary to keep the region viable.

"This is an opportunity that we're missing out on," Dorigo said. If the nation doesn't allow for the advancement of renewable companies, the country might cease being a world leader, he said.