It took eight years of operating in the red before Pearson Fuels began to turn a profit, but now that the alternative-fuels gas station and distributer is celebrating its 10th anniversary, it is finally seeing revenues in the multiple six-figure range, general manager Mike Lewis said. What’s his advice to others considering entering the market? “Don’t do it.”

“Years ago, we were just losing money hand over fist, as fast as you could imagine you could lose money at a gas station,” Lewis said. “But there was so much interest, I mean people would call me from New York City and say, ‘Oh it’s the greatest thing, we want to build something like this!’ And in the meantime I’m like I’m dying here. I mean don’t build it.”

Pearson Fuels, headquartered on El Cajon Boulevard in City Heights, offers 10 different types of fuel, ostensibly the most variety of any gas station.

“I’ve been saying that for 10 years all over the world and no one ever says I’m wrong, so it must be right,” Lewis said.

Aside from three types of traditional gasoline and diesel, Pearson offers E85 (a blend of 85 percent corn ethanol and 15 percent gasoline), biodiesel, propane as well as electric charging stations. The station just received a grant to reinstall its two-pump natural gas station, which was removed three years ago when the cost of upkeep hit $200,000 and its maintenance was no longer economical. 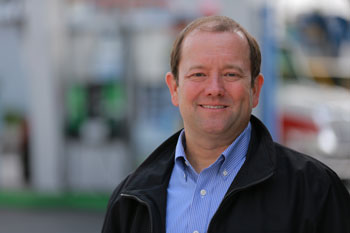 Lewis described the alternative-fuels industry as a large circle of ideas and possibilities, with a tiny dot in the center representing what is actually feasible. He said natural gas is slowly entering that dot of reality, though its environmental sustainability still far exceeds its financial sustainability marks.

“Natural gas is the greatest, the newest. Everyone talks about natural gas and there are maybe four or five types of cars that you can get right now with natural gas,” Lewis said. “When we opened in 2003, there were more cars than that.

“They are not economical. No one’s ever made money selling natural-gas cars. They do them for a few years and lose staggering amounts of money and stop. So not to say there isn’t a lot of potential with natural gas here soon — I mean we’re looking at putting the station back in — but it’s easy to go, ‘Oh this is the greatest, this is the golden age of natural gas!’ Well, there are fewer cars now, so it’s a very short memory everybody has, or people weren’t paying attention to it back then.”

In addition to natural gas, Pearson Fuels is also in the early stages of entering the hydrogen-fuel market, though Lewis said that because of the high cost of entry and a lack of customers, he doesn’t foresee hydrogen entering that small dot of reality for many years.

The company and a partner have the funding for four hydrogen pumps, which have a price tag of $1.5 million each, with plans to install them in Los Angeles and Bay Area. Lewis said one or two of these could be built within the next year, though the process is so nuanced and novel that the timeframe is extremely up in the air.

There are no hydrogen cars in San Diego and only 220 in the entire state, meaning it would be impossible at this point for Pearson, or any company, to recoup its investment in hydrogen fuel.

“So you can see very quickly that there’s no possible way of making your $1.5 million back. Even if all those 220 cars came to the same pump, it would be a challenge. So you have to have a lot of faith that these cars are coming. And the vehicle manufacturers, specifically Honda and GM, are publicly committed to making these cars available if there are enough stations.”

Lewis said the government is also investing in hydrogen fuel and starting to offer grants and monetary incentives for its development, which is a critical component of Pearson’s business model. The gas station aspect of the company is by and large a money guzzler, rarely turning a profit.

Pearson has been profitable through its second arm of distributing E85 fuel and serving as a middleman of sorts to assist independent gas stations interested in having alternative-fuel pumps installed in their stations. Pearson Fuels, which has installed 16 pumps throughout the state so far, has government funding for 19 more E85 stations, which it hopes to build in the next two-and-a-half years.

“So basically we get government funding, and I think it was $1.3 million for those 19 stations, and then take that funding along with the station owner’s funding and we build this equipment in their facility, which we do not own,” Lewis said. “And then they buy the fuel from us — they’re required to buy the fuel from us.”

Pearson buys and blends the ethanol that its customers use, and uses a similar process for B20, a blend of 20 percent biodiesel and 80 percent diesel. The company recently made this biodiesel process more efficient by creating a biodiesel blending terminal, which allows the truck driver transporting the fuel to simply punch in the blend desired and have it mix in the tank before emitting the required blend into the truck. In order to do this, Pearson had to get approval from the California Energy Commission to move the existing tanks of fuel to be side by side.

Lewis said the regulatory environment in California makes his work extremely difficult, but the company has no plans of expanding into other states any time soon.

“It’s a double-edged sword,” he said. “The regulations are worse than you think. People who read about it all the time and say how bad it is and inefficient government is and all that — it’s three times as bad you think. It’s horrible. I can’t think of another way to say it — it’s horrible.”

“On the other hand, because we’ve done them, and we’ve worked on them for so long, it is frankly a barrier to entry to our competition,” Lewis said. “I can almost guarantee you no one would try to come into California and do this without calling us.”

Lewis said Pearson has no plans of trying its luck in other markets, since there is so much available work in California.

“The California Energy Commission, to meet certain goals, needs a significant number of E85 stations — something like 800 or 1,000 stations,” Lewis said. “And there are maybe 60 in California right now. So why do I really need to go to Vegas and Arizona when there’s that much demand for it here?”

Though the natural gas and hydrogen fuel segments of Pearson’s portfolio may not be profitable for quite some time, Lewis said he is confident they will be in the long term, which is the outlook the company always takes.

“We’re longer-term thinkers than your typical people or we wouldn’t be doing this business,” Lewis said. “We built that station when gas was $1.79 a gallon. So no one was talking about global warming, and not even very much about dependence on foreign oil.