Working in the energy business was never a goal for Lee Krevat, now the director of smart grid and clean transportation for San Diego Gas & Electric, and in fact was the result of a begrudgingly made career switch from Silicon Valley at the behest of his family.

Fifteen years later, his passion for the job is palpable, and his work to give customers the most efficient, convenient service possible is evident in the multitude of smart-grid projects he and his department concurrently have in the works, many of which are groundbreaking and put San Diego at the head of the energy sustainability and innovation pack.

"Right now we have over 50 projects on our smart-grid list," Krevat said. "Every October we file a status report to the California Public Utilities Commission with how much we're spending and the benefits, so that’s why I know that number really well, we just filed our status on October 1."

Krevat said all of these projects, which include usage meters, microgrids and a new, speedier outage management system, are driven by three primary factors: customer empowerment, state environmental policy requirements, and grid improvement and modernization. 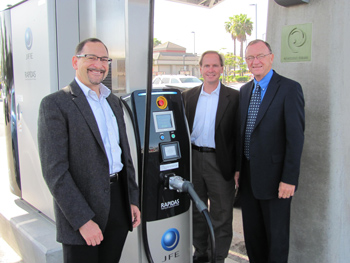 On the meter front, the technology has advanced to a point where tools can communicate with the meter and decide to raise or lower the thermostat, for example, to save money and energy without effecting comfort. What used to be a monthly check of electricity usage can now be done every 10 seconds, enabling the customers who choose to purchase these items from third-party companies to know exactly how much each of their appliances is costing them, and know when getting a new one would save money.

"We don’t define what the third parties do," Krevat said. "That’s the exciting thing; it's letting loose other companies and creating another industry to use their creativity to create new products that can help our customers by leveraging that data."

Krevat said there's currently only a small portion of SDG&E customers taking advantage of these money-saving meters and monitoring devices, in part because the energy provider can't market the products.

"We're hopeful that number will grow, and are actually looking to create a rebate program so customers who buy it get a rebate from us, and the companies will help advertise it," he said.

Another of SDG&E's innovative projects under Krevat's jurisdiction is the microgrid in Borrego Springs, which has a second phase in the planning stages.

"That microgrid is one of very few in the world in terms of size and complexity," Krevat said. "It was funded partially by the Department of Energy and partially by the California Energy Commission," though SDG&E spent some money for additional functionality as well.

Since the technology is so new, the microgrid was tested over a dozen times to ensure it would serve its purpose of providing local power if other parts of the grid were shut off, purposefully or otherwise. It worked in the tests, and proved its worth in the first week of September when intense winds in Borrego knocked over 20 transmission lines and distributing piles out, leaving 2,780 customers in the dark. Using the microgrid, SDG&E was able to restore power to more than 1,000 of those customers, including the business district, gas stations and a designated cool zone at the local library, without touching the main grid, a feat that Krevat said is unique to Borrego.

In the next phase, SDG&E hopes to use a battery-storage system to be able to gauge and balance how much solar energy nature provides versus how much the community is using, and turn parts of the solar farm on and off accordingly.

"In Borrego, there's about twice as much solar during the day as the community uses, even on the hottest day," Krevat said. "That’s too much, and so when there's an outage in Borrego, that solar energy can't get to San Diego because there's some break in the line -- in essence, it turns off. So the next phase is, we don’t want the whole solar farm to turn off, we want to look at how much energy is used by the community, leave that amount still being produced, and use a battery to basically provide more and less energy, based on what's going on with the sun and residents in Borrego.

"No one in the world has done a project like this."

Krevat's even longer-term vision for the microgrid includes more mini-microgrids like the one being installed in the Civita community in Mission Valley, which can be energy sufficient on its own grid, though he predicts widespread use of these sustaining mechanisms wouldn't be seen until 2020.

"I do see a future where the grid works in concert with local generation on peoples' rooftops and parking lots," he said. "The future that we see is if there's an issue on the grid, all the energy being generated in neighborhoods and communities can be leveraged to keep these communities energized."

"It's going to take lot more technology than solar panels. We need software, batteries, energy products and hardware that can keep that balance going," he explained. "We can't produce more than we're using or use more than we're producing, because either one will cause the neighborhood energy to collapse."

Switching gears to the clean transportation side of Krevat's role, SDG&E is working to incorporate electric vehicles into the functionality of the smart-grid system, with the goal of utilizing monitoring technology to have cars automatically charge at off-peak hours when there is excess solar availability, and stop charging at certain hours when the grid is stressed and stretched thin.

San Diego has the highest number of electric vehicles per capita in the country, and the only companies to top SDG&E on the number of employees with electric cars are Qualcomm (Nasdaq: QCOM) and Google (Nasdaq: GOOG). For Krevat, the importance of enabling clean transportation is more than just about serving an existing need.

"I refer to electric vehicles as red, white and blue and green too," he said. "I mean they're just so important, really important for the United States from an energy independence perspective, that we don’t have to import gas. That means fighting less wars."

Krevat, who graduated from Carnegie Mellon University with a degree in computer science before taking his talent to Silicon Valley, said talking to people about these issues and focusing on things other than money make him glad his family outvoted him in the decision to move to San Diego.

"Silicon Valley was glamorous. I solved hard problems, but it was all about money," he said. "Then I realized as part of SDG&E, it wasn’t. Making money is great, but part of the company’s role is infrastructure and making sure the city can thrive with costs people can afford. So it made my mission more than just about how much of the product developed could sell.

"I was afraid this job wouldn’t be as interesting, but look at the smart grid -- we have 50 projects that I have said 'Yes, let's spend money on and put them in motion.' And I understand every project and how it's going to help. I get to talk to people about these issues, so it's more exciting than Silicon Valley."

Though he plays a key role in the process, Krevat has no illusions about the collaboration it takes to accomplish all of these projects.

"I don’t want to underplay that it's not just SDG&E -- it's about the community," he said.