In the heart of San Diego's culturally diverse Diamond Neighborhoods of southeastern San Diego, a gathering place for community conversations and a national learning agenda on community strengthening is under construction.

The Joe & Vi Jacobs Center, planned by teams of residents to reflect the richness of their cultures and community, is being built by a team of primarily local, minority and women-owned contractors committed to the success of a project with both economic and social goals. The contractors are playing an important role set out by a Construction Working Team that mirrors the community building and neighborhood strengthening goals of the project's developer, the nonprofit Jacobs Center for Neighborhood Innovation (JCNI). 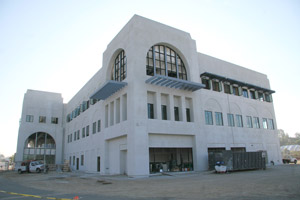 Many of the contractors are Historically Underutilized Business Enterprises (HUBE). They account for 71 percent, or $10.5 million of contracts awarded so far, with half of them living or having offices in the community, which primarily spans San Diego's Fourth Council District.

The Joe & Vi Jacobs Center is a $23.5 million, three-story, 75,000-square-foot center for culture, commerce, community and conferences. The building will be home to a cultural training kitchen, state-of-the-art meeting and conference center, accessible community and office space, a showplace for multicultural art and the headquarters for JCNI. The building will also become a "learning institute" where foundations, community and asset builders, and policymakers from all over the world will come to learn about neighborhood revitalization and resident-led community change.

Construction of the building has been financed in part by a $15 million New Markets Tax Credit Loan from Clearinghouse CDFI with investments from U.S. Bank and Washington Mutual (NYSE: WM). A lead gift by the Jacobs family equipped the building's infrastructure for conference technology and solar power. Matching funds are currently being raised to fully equip the meeting and conference center's audio/visual capabilities and add solar panels to power the building. 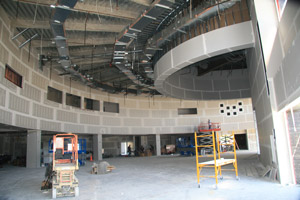 The facility will house a meeting and conference center, community and office space, a gallery and more.

JCNI was founded by the family of the late Joseph J. Jacobs Jr., who, with wife Violet, started and grew the Jacobs Engineering Group from their garage to what is today an $8 billion company. Over the last decade, the foundation focused its philanthropy in support of resident-led change in the Diamond. The partnership between residents and the foundation has already created Market Creek Plaza, the $23.5 million commercial and cultural center and has now sets its sites on transforming another 50 acres into the $1 billion Village at Market Creek, a vibrant community cultural hub where people will be able to live, work and play. Resident teams working on plans for the center, which is the heart of this effort, chose to name it to honor the Jacobs' family's commitment to the community, entrepreneurial spirit and belief in its residents.

Some of those residents are involved with the HVAC, stucco, painting and drywall as contractors. They were selected for their "best value bids," which included the best combination of price, qualifications and their response to seven "Community Builder" criteria developed by the Construction Working Team. The criteria included a willingness and ability to:

¥ Award contracts for all or a portion of trade work, participate in join ventures and provide mentoring to District 4 and HUBE contractors;

¥ Create other strategies and opportunities to build construction and business capacity in District 4; and

"This is not just a resume-building opportunity for local contractors," said Rickey Laster, president of the Multicultural Contractors Group and member of the Construction Working Team. "We are bringing local contractors to the table and putting together joint ventures with larger firms to help grow the smaller firms' capacity. For example, five contractors from the Joe & Vi Jacobs Center project are now working for one of the city's largest construction firms on a big, high-profile job in San Diego."

Laster knew Joe Jacobs before his death, and sees this as an opportunity to spread "Dr. Joe's" legacy.

"I really focus with these contractors on articulating the vision of Dr. Joe," Laster said. "He was an entrepreneur who believed in people's ability to work hard to achieve their dreams. This building, and the work of these contractors, is a great tribute to him and what he strongly believed in."