Jack Burger, president of tenant improvement firm Burger Construction, describes his company's role as not only a builder, but as a negotiator.

"It's the experience of being able to walk the line between representing the landlord, which is probably 75 percent of our work, and making sure the tenant has a good experience," Burger said. "So by the time we walk away, the landlord and the tenant are not fighting."

Burger grew up in San Diego's North County, rooting his career in construction during childhood.

"I started building tree forts at 10 years old, and the next thing you know, I was building houses," he said. 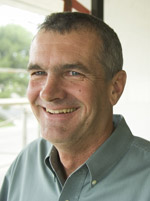 As he grew older, he began working for Douglas Allred, one of San Diego's pre-eminent residential contractors of the time. Burger stayed with Allred for two years before attending college at the University of Oregon. After graduating, he entering the residential realm of construction.

After 10 years working in residential development and surviving two job layoffs in two years, Burger decided it was time to delve into the commercial side of the business. And in 1996, he started Burger Construction.

"(Residential has) too many homeowners with emotional decisions to make," said Burger, explaining his drive for commercial renovations.

Burger Construction is the fourth largest tenant improvement company in San Diego County, with 26 employees. Last year's revenue totaled $33 million, a number Burger expects to increase slowly and steadily this year to correspond with the overall slowing in the construction industry.

"It will increase every year," he said. "It's not going to go crazy, though."

With the increase of construction firms in the local market, Burger expects the competition between firms to rise as well. What sets Burger Construction apart, he said, is the company's efficiency, both for time and budget.

"I think the overall thing with our company is that we're very efficient with how we do things," he said. "It's a really fine line to walk because you're on a short timetable and everything is so compressed."

"We're always trying to solve problems on the fly. It's fun, it's what we do," he added.

The buzzword in improvements in the past year has been "LEED," or Leadership in Energy Efficiency and Design, said Burger. A set of guidelines geared toward designing energy efficient and environmentally sustainable buildings, the U.S. Green Building Council's LEED certification fits in with many of Burger's clients' visions, but falls short in their budgets.

"Creative space," another common request he gets from clients seeking to break from the dull office mold, drives costs up.

"When you have these gray areas of what you're supposed to build, the costs don't go down," he said. "It costs more to build with the green environment because there's new creative ways that haven't been proven to be as efficient as the old ways."

An example of a creative and efficient project is the Reef Co. building in Carlsbad, a $3.5 million project to turn an old laboratory into the sandal and surf wear manufacturer's new home. Owned by VF Apparel, designed by Pollack Architects and developed by Cruzon-Monroe, the Reef building was refurbished using wood from a 100-year old barn, which includes exposed concrete flooring and showcases a two-floor high vinyl image of a wave in the lobby.

As a corporate philosophy, Burger embraces social responsibility. The company has participated in the Baja Challenge for the past seven years, building homes in Baja California and working alongside those considered competitors back in San Diego.

"It's a friendly competition going on," he said.

Employees are also set to participate in the "Burger Experience," a day of feeding the homeless at St. Vincent de Paul shelter followed by a scavenger hunt through downtown San Diego and Balboa Park. Points earned by employees throughout the hunt will translate into dollars for a charity of choice. The company has earmarked $5,000 for this event. Participants will walk and use public transportation

"As a company, we're getting into a mindset that we can give back to the community as a group," he said.