By JAN PERCIVAL, Special to the Daily Transcript
Friday, November 30, 2007

The Liberty Station Marketplace turned another historic page recently with the grand opening Nov. 1 of an ultra-urbane Vons grocery store at the former Naval Training Center.

Opening ceremonies for the super-sized supermarket, located at 2495 Truxtun Road and developed by La Jolla-based C.W. Clark Inc., were followed by the kick-off of the San Diego Food Bank's Hunger Hits Home this Holiday Season food drive, which will aid needy families throughout the county, including many victims of the recent firestorms.

With its fresh design concept and abundance of specialty and gourmet food items, the new 45,000-square-foot Vons at Liberty Station Marketplace creates a whole new shopping experience that will attract customers from miles around. It occupies two fully restored military barrack buildings separated by an open-air courtyard area with covered seating and market-style floral and food displays. 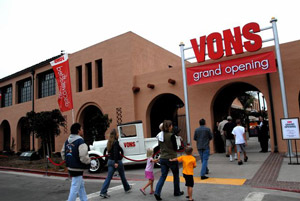 In addition to this one-of-a-kind store design, the customer-focused lifestyle format boasts a large selection of natural and organic produce, a full-service meat counter, and fresh bakery and deli services. Other upscale offerings geared toward today's discriminating consumer include a wine cellar with hard-to-find varietals and spirits, a lavish cheese department, exotic olive bar, expansive culinary zone, nut and seed bar, and a Starbucks with seating area and free WiFi services.

Vons is the second grocery store now available to area residents and local shoppers at the mixed-use center. A Trader Joe's specialty food store -- as well as a handful of other restaurants and boutique shops -- opened earlier this year at the much-heralded and long-anticipated Liberty Station Marketplace. The 160,000-square-foot retail and commercial center anchors the southwest end of Liberty Station, the 351-acre former Naval Training Center that has been undergoing a decade-long renovation.

The grand opening of Vons at Liberty Station Marketplace is being hailed by local developer Craig Clark as the final major component of the $54 million center. 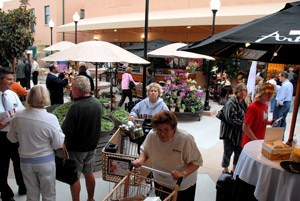 The store features a courtyard area with covered seating and an open market ambiance.

"This glorious grocery store truly represents more than just a place to buy milk and bread," said Clark, president and CEO of C.W. Clark Inc. "It's indisputable evidence that this once abandoned and shuttered military site has evolved into the vibrant and highly successful commercial enterprise envisioned by forward-thinking citizens and city leaders."

The city of San Diego and The Corky McMillin Cos. are partners in the $850 million redevelopment of the 75-year-old former military base that includes a blend of residential, retail, business, recreational, artistic, cultural and educational developments.

Clark's commercial real estate development company was undaunted by the challenge of transforming three two-story buildings, originally built in 1932 to house Navy recruits, and one single-story building, formerly a military service mall, into an urban shopping center that includes a variety of brand-name retail outlets, specialty shops and casual eateries as well as second-floor office space.

At the new Vons store, Clark points to the innovative floor plan and authentic architectural accents that make this a "distinctive and inimitable" supermarket.

"We worked diligently to preserve the unique characteristics of these remarkable 1930s-era structures as well as to keep the public passageway and striking view corridors between the buildings open and accessible," said Clark, whose company also refurbished to the tune of $1.35 million the historic North Chapel directly adjacent to the retail center. The North Chapel now is available to community members for weddings, spiritual celebrations and other special events.

For the past five years at Liberty Station, C.W. Clark has worked closely with Heritage Architecture & Planning, Nadel Architects Inc. and general contractor Legacy Building Services to restore, retrofit and rebuild the chapel and other dilapidated buildings that have sat vacant and abandoned since the Navy closed the base in 1997.

Though sparkling new, the Liberty Station Marketplace is in many ways like an old-fashioned town plaza with its tree-lined sidewalks and colorful storefronts, and featuring several open-air courtyards for informal gathering and special community celebrations. All of the shops and businesses are connected by covered arcade walkways, with ample parking spots in a large lot in front of the stores.