By JAN PERCIVAL, Special to the Daily Transcript
Wednesday, December 12, 2007

The developer behind the new $30 million Hilton Garden Inn and Riverfront Conference Center in Yuma has secured financing for the first major components of the much-anticipated and historically significant Pivot Point redevelopment project.

"The completion of this financing package is a significant step forward for this exciting project that will create new jobs and revenue streams for the city of Yuma," said Craig Clark, president and CEO of C.W. Clark Inc. "We're pleased that Specialty Finance Group supports our shared vision for the renaissance of this spectacular riverfront." 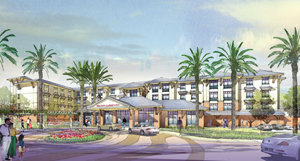 Pivot Point is a joint-venture mixed-use project of the city of Yuma and San Diego-based Clark-Lankford LLC, which in 2005 signed a 50-year lease agreement as master developer for the 22-acre project at the historic Yuma Crossing. It is estimated that the total private investment in the overall project is more than $100 million.

Already being recognized for its innovative efforts, the Pivot Point redevelopment project earlier this year received a Public-Private Partnership Award from the International Economic Development Council.