Since taking the reins of the organization in August 2002, Barbara Warden has continued to increase the Downtown Partnership's role as the leading business advocate for economic growth and revitalization of downtown, and enhanced the management and implementation of the organization's many programs.

Warden is well known for her service as San Diego City Council Representative for the Fifth District, a large and diverse area of San Diego comprised of neighborhoods and communities as diverse as Rancho Bernardo, the San Pasqual Valley and Linda Vista. During her seven years as Fifth District Representative, she served as Deputy Mayor, chaired all three standing committees and represented the city at the San Diego Association of Regional Governments. 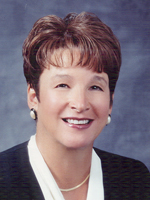 Application of her results-driven philosophy was defined by her integral roles in the raising of $110 million to construct state Route 56 and close to $400 million to provide improvements to I-15 and the construction of Route 905; oversight of the city's $2 billion annual budget; and the building of three new libraries. In addition, Warden initiated business roundtables in her district, construction of Becky's House, the Trigger Lock Giveaway program and the Safe Schools Initiatives; represented the city in negotiations for naming rights for what is now Qualcomm Stadium; and was a founder of the Retired Seniors Volunteer Patrol.

Warden's public service also has included service on the board of directors, Transportation Committee and High-Speed Rail Taskforce of the San Diego Association of Governments (SANDAG); gubernatorial appointments to the Police Officers Standards & Training Taskforce and the California Commission on Criminal Justice; vice chair of the San Diego Trolley board of directors; board member of the San Dieguito River Valley Joint Power Authority; trustee of California State University of San Marcos; founder and chair of Citizens to Improve I-15; and as founder of both the Palomar College Foundation and the Rancho Bernardo Chamber of Commerce.

She has served on the Holiday Bowl Board, Super Bowl Committee and the Century Club. In addition, she is an active supporter of Neighborhood House, YWCA's Becky's House, North County Interfaith Council, Aids Walk and Mama's Kitchen.

After completing her term on the City Council, Warden joined WINfirst, a broadband company, which she served as regional vice president/general manager until early 2002, when she formed her own company to serve as a consultant on public/private partnerships.

Warden, who earned a Bachelor of Science degree in mathematics with a minor in economics from Dickinson College in her native Pennsylvania, taught math prior to relocating to San Diego in 1968. Three years later she founded The Bernardo News, a community newspaper that she successfully operated for nearly 25 years as a thriving news medium that promoted important civic issues and collected accolades for creating a dynamic forum for discussion, including "Best Community Newspaper in the Nation" honors from the National Newspaper Association.

She resides in Rancho Bernardo with her husband Richard. They proudly claim two sons, Doug and Greg, and four grandsons, Josh, Jet, Grant and Ryan.