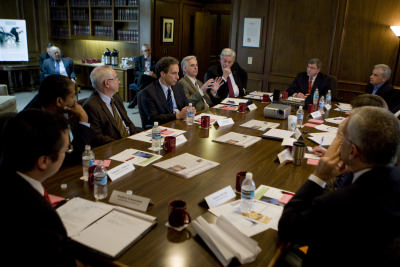 "It is a huge task, this is not new," Michael Murphy, president and chief executive officer of Sharp Health Care, said of health care reform. "It comes down to a plan that all stakeholders can support, and the reality is we're all going to have to give a little to get to a system that can really be comprehensive."

Murphy was one of 10 health care CEOs, doctors and other officials who participated in a recent Daily Transcript roundtable, sponsored by Blue Shield of California, Pacific Building Group, National University and Hospital Association of San Diego and Imperial Counties.

Most attendees said they were glad Schwarzenegger attempted a plan, and some said they thought it was a good one and were saddened by its failure. But more disheartening was the fact that the state -- and the rest of the country -- is now left with a system everyone agrees is broken.

"The system is sick," said Tom Epstein, vice president of public affairs for Blue Shield of California. "It's a problem that's not going to go away. The solution may end up coming at the national level now if a Democrat's elected president. That can definitely happen, or at least they'll make an attempt. In California they probably would now do more piecemeal reforms that may or may not help."

Democratic presidential candidates Sen. Barack Obama and Sen. Hillary Clinton have both said they'll try to enact national reforms if elected. Republican frontrunners Sen. John McCain and former Gov. Mike Huckabee have suggested changes to the system, though the Republican plan is largely to allow the states and private sector to lead the way rather than the federal government.

Though his plan failed to get through the California Senate at the end of January, Schwarzenegger maintains that he will continue trying to pass health care reform in the state.

"I want the people of California to know I will not give up trying to fix our broken health care system," the governor said in a written statement at the time. "The issue is too important and the crisis is too serious to walk away after all the great progress we have made." A spokeswoman for his office said recently that Schwarzenegger has been meeting with groups who were both in favor and opposed to the plan.

But some local health care officials worried that since the plan failed, no one will take it up again for some time.

"Whenever this has come up in the past and a bill hasn't been accepted, it becomes like kryptonite," said Dr. Albert Ray, president of the San Diego County Medical Society. "It becomes radioactive and nobody wants to touch it politically for a few years."

Ray said he liked many of the details of Schwarzenegger's plan, but had ultimately come out against it because he didn't think there was sufficient funding.

Michael Bardin, senior director of public and government affairs for Scripps Health, said the same issues that made it so hard to get other health care reforms passed remain in place, which is why a lot of people in the industry don't see any comprehensive changes on the horizon.

"Health care is in this odd and unique position where it's trying to find business solutions and needs to deal with the finances and solutions that make sense, and it's also a social and human need," Bardin said. "The payer sources -- sort of half of them are government-based and the other half are marketplace-based and commercial. And finding the balance point between the two is the real dilemma."

Most of those involved in the health care industry said while they wait for innovative solutions, more and more efforts are being put into preventive care and wellness programs in an effort to get patients healthier and keep down costs.

If a major overhaul of the health care system does come in the next few years, most officials at the Transcript roundtable seemed to think it would come from Washington.

"The problem is a pervasive problem and it doesn't go away because we weren't able to pass legislation," said Nathaniel Oubre Jr., a senior vice president and executive director with Kaiser Permanente San Diego. "We are all going to pay, the question is whether or not we're going to have a financing system that's going to be broad-based, whether or not everyone's going to contribute, whether or not we can find something that's equitable."

"I would agree that the governor showed a lot of leadership and fought this great battle for us," he continued. "Now we'll see what happens on the national level."