The realm of the health care industry involves challenges inevitable to Michael Murphy's responsibilities as president and CEO of Sharp HealthCare.

The duties of the San Diego not-for-profit health care organization is to set the right priorities and goals to "allow us to do the best that we can in spite of the challenges," Murphy said.

Sharp is comprised of approximately 2,600 physicians on medical staffs including 1,910 physicians in medical groups and more than 14,000 employees all working toward the same vision: to redefine the health care experience.

In an initiative to meet such a goal, "The Sharp Experience" was created in 2001 to improve the organization's performance. Murphy said the objective is to make Sharp "the best place to work, practice medicine and receive care." 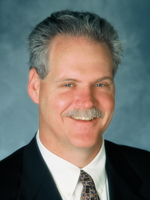 These skills were parlayed into a position as chief operating officer at Sharp Grossmont Hospital in 1991. After changing positions within the Sharp organization, Murphy found his way to the top five years later.

In early 2000, the leadership team organized focus groups among patients, employees and physicians. Murphy said the consensus was that Sharp was "a good organization but we weren't a lot different than most organizations."

In order to stand out, Sharp executives studied businesses they felt made a difference in engaging their stakeholders, such as Disney Institute and General Electric (NYSE: GE), according Murphy.

"Since 2001, we've become very focused as an organization and we've made great strides," Murphy said.

Evidence of the organization's achievements since launching The Sharp Experience came in the form of the Malcolm Baldrige National Quality Award in 2007. Sharp is also the only health care system in the state to be given the Magnet Designation for Nursing Excellence award to two hospitals, Grossmont and Sharp Memorial Hospital.

"The Sharp Experience doesn't solve them, they're just realities of the marketplaces we work in," Murphy said. "And those challenges are part of what our job is."

Operating in a financially responsible manner is a key concern for Sharp in serving the community.

"We all have to set our priorities to do the things we can do within our financial means, and we are all stretched," he said.

Sharp represents $1.4 billion in total assets and $1.9 billion in total revenue for 2007. The organization accesses most of its capital through bonds, according to Murphy. He said the community technically owns Sharp since it is a not-for-profit.

As the San Diego Association of Governments' 2030 Regional Growth Forecast projects the region will add about 1 million more people between 2000 and 2030, bed shortage issues have surfaced.

Along with bed shortages are the growing number of uninsured. According to the most recent San Diego Healthcare Safety Net Study, the uninsured accounted for 15.2 percent of the county population or 463,415 people in 2005.

The study also found 20.3 percent of the uninsured and 18.2 percent of the insured patients use emergency departments more frequently for preventable care.

"Getting patients to a medical home that isn't the emergency room but is properly taken care of in the appropriate outpatient settings is one that will help address the whole issue," Murphy said.

"We can't just continue to build inpatient facilities," he added.

Structures are facing their own dilemmas with the Hazards U.S. (HAZUS) regulations, which evaulate hospital buildings based on their level of seismic risk.

Hospitals across the state are evaluating which buildings labled under the Structural Performance Category -1 (SPC-1) by the California Building Standards Commission will need to upgrade by the 2008/2013 deadline. Buildings at a lower seismic risk will be reclassified to SPC-2 and will have until 2030 to comply.

"We are all still trying to determine if that is going to impact us," Murphy said.

He added, "We remain hopeful and optimistic that the new HAZUS (regulations) will allow us to keep some other buildings online longer than we thought we would."

Sharp currently is working on plans years out from completion. Projects reaching the finish line include a new hospital at Memorial opening this fall, which will address most of the seismic issues, according to Murphy.

An additional 90 beds will be placed in the tower added to Grossmont three years ago, and 19 extra beds will be added at the Sharp Chula Vista Medical System within the next year.

"Those are kind of small moves, but they're big for us," said Murphy.

Additionally, Sharp will implement a new electronic health record across its system.

"These are all projects that have been in the works," Murphy said. "And similarly, we're currently working on projects that are two, three, four years out for us to continue to meet the needs of the community."

Murphy described The Sharp Experience as a journey.

"We're not done. We have many areas we could continue to improve on, but we're very proud of what we've accomplished in moving our organization forward," he said.

"No matter how well you're doing, the good always want to get better."